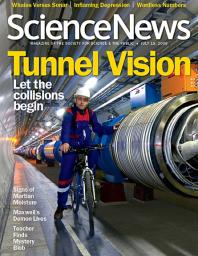 This month’s issue of Science News features an article on the Large Hadron Collider. The eight billion dollar collider is being used to see what the big bang looked like and to find out if Albert Einstein was actually smart.

Tour de France Above, Science Below

Science is all well and good but what caught my eye was the guy on the cover next to the accelerator; the guy riding his bicycle to get around the underground labyrinth. While the Tour of France’s peloton is cranking across the country, scientists are cranking along the 27 kilometer tunnel many meters below the surface on bikes. Good for them!

Over 100 Years and Still Recognizable

While science today would be unrecognizable today to the scientists of a hundred years ago, the bicycle is still basically unchanged.

The bicycle was invented in the mid- to late-1800s. While materials have changed substantially over the years, the basic bike concept has changed little. Johan Smith from 1885 could ride a bike from 2008 without any additional instruction. The same couldn’t be said about Johanna Smith being able to turn on a modern day kitchen stove.

Here is your challenge: come up with a common household machine that was invented prior to 1890, is still used today and whose current incarnation could be used by someone from 1890 without additional training.