My Google News bicycle search grabbed a mostly favorable piece from the Fort Scott (KS) Tribune this morning. It was a collection of tidbits from the Kansas Department of Transportation and contained a “helmet saved her life” anecdote. 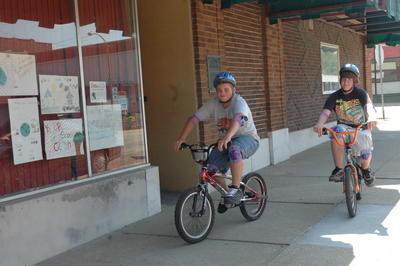 At the top of the story was a picture, “Adam Arnold, 14, Fort Scott demonstrates the proper use of bicycle safety equipment including the use of a helmet, elbow pads and knee pads while riding his bike Wednesday afternoon in downtown Fort Scott.”

Oh, by the way, they were riding on a sidewalk, which is more dangerous than being in the street.

Here are the comments I sent to the paper:

And, while it’s courteous to not let traffic back up behind any slow-moving vehicle, whether it’s a tractor, 18-wheeler going up a grade or a bicycle, none of those vehicles is required by law to dive for a ditch just because someone behind wants to go faster.

Here is why I wear a helmet.

On the other hand, magic foam hats are like parachutes: you only need one when something has gone tragically wrong – and wearing one doesn’t always mean that you won’t get hurt.

Your picture of the two kids riding with all the protective gear raises two questions:

1. Do their parents make them wear all that garb when they’re in the car, where they are much more likely to be injured?

2. Do they know that they are more likely to be involved in a crash on the sidewalk because cars coming out of driveways and at intersections aren’t looking for things moving at faster than walking speeds. (Arguably, I could have ended that sentence after “looking.”)

This isn’t an anti-car, anti-helmet rant. I’m just pointing out that bikes have a place on the road and that we all have to watch out for each other.