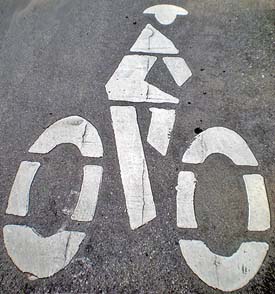 I have my Google News set up to search for bicycle stories. It usually turns out to be a depressing list of stories about people who have been run over, mugged or police reports about stolen bikes.

There was a pretty even-handed story in the Kalamazoo Gazette this morning about clashes between the increasing number of cyclists on the road and motorists who don’t understand that riders have the right to be on the road.

Unfortunately, it sounds like Kalamazoo has the normal percentage of jerks and clueless riders who swarm all over the road and break every law in the book (I’m talking about bikers, not the 100% law-abiding motorists who would NEVER speed, coast through a stop sign, blow a red light, drive while impaired or text on a cell phone while changing CDs.)

Donald Thornton doesn’t think it’s a good idea to take the lane. “Not everybody can react immediately if they drive around a curve and there’s a bunch of (bicyclists) right there in front of them,” said Thornton, who lives on Van Buren County Road 358 in the Lawton area.

Motorist Donald Thornton says he can’t react immediately if he drives around a curve and finds a group of cyclists in front of him.

How about a slow-moving tractor? Or a broken-down 18-wheeler? Or a small child crossing the road? Or a garbage can that’s been blown into the road? Or a rescue rig working an accident? Or a fire truck?

He’s not alone in his thinking, unfortunately.

Be friendly to the bikers you pass. If gas prices go up much higher, you may be one yourself. And, you’ll find that’s not necessarily a bad thing.

4 Replies to “Watch Out For Mr. Thornton If You’re Riding In Kalamazoo”