I’ve already named the Active Tunes i-RIDE Pro the winner in my unofficial MP3 speaker blast-out. Here are a couple of als0-rans that had some good features, but never made it on my bike more than once, if that.

The SanDisk Sansa Shaker is made for kids 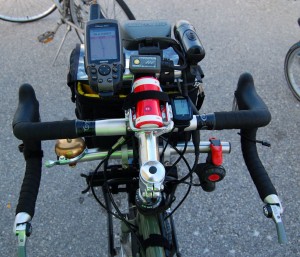 One of Grandson Malcolm’s friends gave him a SanDisk Sansa Shaker and his dad handed it to me for test drive.

The hourglass shape mounted nicely to my bars with a strip of Velcro, but the volume wasn’t quite enough even on a quiet trail.

Its shape lent itself to fitting on my CamelBak strap, but I didn’t find the controls that easy to operate up there. 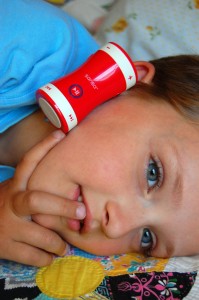 The Sandisk Sansa Shaker went back to Malcolm

The next day his mother, D-I-L Sarah, messaged me, “I don’t suppose you have a playlist for that little music player Malcolm has, do you? Just wondering what Malcolm’s gonna hear next after “I am the Walrus” and “Look At Miss Ohio.”

I assured her that there wasn’t anything on it that was worse than the mix tape I had put together when Son Matt was in grade school. It was called the Altered States tape and had on it every drinking and drugging song I could find.

We kept waiting for a call from his teacher wanting to talk to us about him singing Jackson Browne’s Cocaine or Jesse Winchester’s Twigs And Seeds during music class.

The Boostaroo would be OK on a motorcycle

About the same time I bought the Byco WRX1, I saw a neat amplifier and some speakers that were designed to fit inside a motorcycle helmet.

The Boostaroo never made it in service on my bike.

Motorcycle helmets are made different than bike helmets. They have a lot more room in them and their sides come down lower on the sides. I never could find a way to mount the speakers, so it went into the junk drawer.

You can listen to all of the speakers here, including on the road.

Tomorrow I’ll post some of  my playlists. After all, what good does it do to have speakers if you don’t have any music to push through them?