Second Place Byco WRX1 may not be available 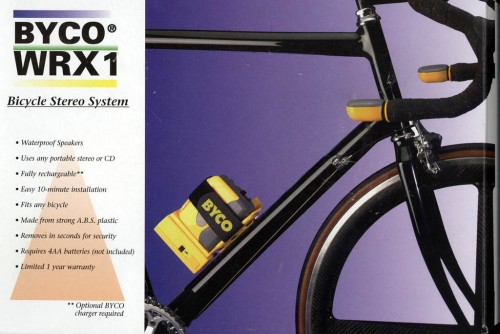 I don’t know if you can find my previous favorite anywhere. It didn’t show up on Amazon and all of the Google searches were dead ends.

The Byco WRX1 was a waterproof amplifier that was designed for the old style stereo players, but the cool thing was that it came with two small yellow speakers that were designed to fit in your bar ends. (Click on the picture to make it bigger.) 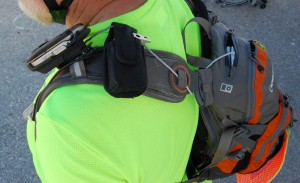 I never used the amplifier and I thought the barend mounting idea was a kluge, but I used the speakers (one at a time) in a small cellphone case strapped to my CamelBak, much like I’m using the i-RIDE Pro.

I liked the Byco speakers because they were small, waterproof and didn’t take batteries. They weren’t the loudest things in the world, but they were OK under your ear.

The i-RIDE Classic, the predecessor to the i-RIDE Pro, wasn’t bad for the $29.99 price.

On the plus side, it used replaceable AAA batteries, so you never had to worry about running out of juice on a long ride if you carried spares. I did a LONG, slow, headwind-plagued century one day and I was afraid I was going to die before the batteries did. 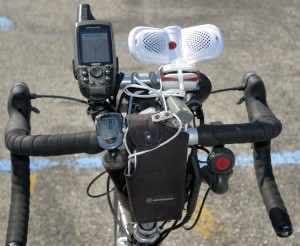 The only thing I didn’t like was the way it looked and the way it mounted. The funky handlebar mount DID work, but it looked like something I’d design (and that’s not a good thing).

The first version came in a blaring white and looked like a pair of Mickey Mouse Ears flopping around. Their second generation came in gray, which was a little less objectionable.

I gave a set to Kid Matt and he loved them for playing podcasts on his bike. He said they also made great shower speakers.

You can listen to all of the speakers here, including on the road.

Check back tomorrow for a look at two more speakers, the SanDisk Shaker and the Boostaroo.

How To Get Ex Boyfriend Back

5 Replies to “What Comes in Second and Third after the i-RIDE Pro MP3 Speaker?”