Are bikes and music “a recipe for pain?” 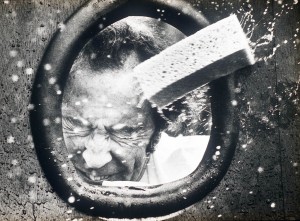 A reader on a cycling group tossed a brickbat at me. [It’s an OSHA-approved brickbat. No bricks, bats nor elementary school principals were harmed in the taking of this photograph.]

I can’t see an experienced cyclist like you telling people to listen to music while they ride.  Diverting your attention from any of your senses while riding is a recipe for pain.  If you want to listen to music, take a ride in your car, or lounge around on your sofa.

I wouldn’t want my senses dulled

I responded by saying that I would take his advice to heart and ride naked from now on so that none of my senses would be dulled.

Another poster came to my defense with a more reasoned response:

Audio if properly used, can add to enjoyment and concentration. Surgeons have favorite playlists for surgery and it is not a distraction. So during surgery, driving, working, running, walking, and riding, properly listening to audio can add to the enjoyment/concentration of/on the activity…Used properly (so you can hear surrounding sounds as well as audio), for some, audio can add to the enjoyment/concentration and at times provides motivation… If I find myself riding (or running) in a situation where I need to turn off the audio to improve my ‘concentration’ or “reduce distraction” ..I do so….

Just don’t make the assumption that just because I listen to music or an audiobook … that I’m an unsafe rider  or runner or surgeon.

What music do I listen to on the bike? 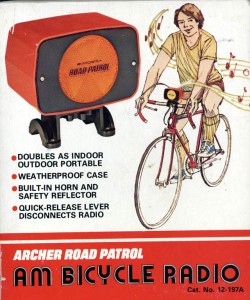 Here’s a video that gets me ready to hop on the saddle every time I hear it. Missy and Shane put pictures of the U.S. bike tour to Luka Bloom’s The Acoustic Motorbike. I’d link to it directly, but the RIAA Music Police made YouTube take down the sound track.

My musical development is pretty stunted. It’s stuck in the 60s and 70s for the most part, back when songs had words that you could understand and play in mixed company. It’s got a lot of folk, protest, ironic country and rock in it.

I’ve got about 180 gig of music on my computer, but I find myself listening to less than half a dozen playlists on my Apple iPod 40 GB Classic.

Here are some of my MP3 playlists

[Son Matt hates PDF files, but it was easy to export the lists from iTunes in that format. I’m all about easy. Laziness is the mother of invention.] 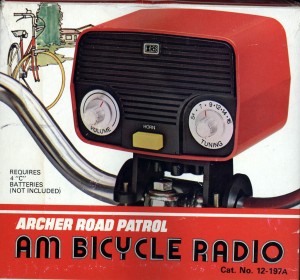 Bro Mark sent me some CDs a few years back that had his music arranged for the type of riding he was going to do that day.

He’d mix hard-charging tunes with slower ones for interval training.

I’m not that organized. I tell it to sort by song title, that way I don’t get a long run of the same artist.

If I need a high-energy song to make it over a hill, then I punch the forward button until I come to one. Some days some songs feel right and other days they don’t. That’s why they make it possible to skip tracks.

I don’t like random shuffles, though. Even though I couldn’t tell you my play order, I sort of have a feel for it from hearing song A follow B after scores of playing. There’s something kinda comforting in that.

This wraps up almost a week of music-related MP3 speaker reviews and tales of misheard songs. Tell us what you like to listen to (or if you think I should ride naked so that I don’t dull my senses).

[It’s easier than ever to leave comments. I removed the restriction that required you to register and log in to leave your graffiti on our walls.]

10 Replies to “Bikes and Music: A Recipe for Pain?”