Wife Lila and I rushed out to our front lawn in West Palm Beach, FL, tonight to catch Space Shuttle Endeavor blast off. The conditions were perfect to see the light trail come over the top of Helen’s house. (We still call it that, even though Helen is long dead and the house has changed hands several times.)

Then the fuel tanks dropped

Based on the time stamps on my digital pictures, it was less than a minute between the time we first spotted the streak of fire and the time the fuel tanks dropped off.

No Floridian who was looking into the sky when the Challenger made its final flight can erase the memory of those swirling clouds of smoke 73 seconds after liftoff on that cold, clear morning in 1986. I found myself holding my breath last night until  STS-126 got past the phrase, “Go at throttle up.”

The Law of Inverse Appreciation

In December 2006, one of the phreds posted a quote, from Colin Fletcher’s The Complete Walker:  “The less there is between you and the environment, the more you appreciate the environment.”

That led me to write to the list, I’ve been working on the hour-day rule of thumb.

I wouldn’t mind the day in the shuttle, but I know that below that, my pleasure is inversely related to the speed of travel above pedal power.

I once did a scouting drive in my car. Even though I was driving 45 to 60 miles per hour, it seemed like it took a long time. When I rode the same route on my bike, it seemed over in a short time. 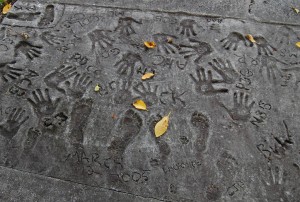 My only explanation is that the car segment was focused on the beginning and the end. On the bike, I was aware of every grasshopper that flew in my face, the smell of the manure along the way, the group of old farmers I talked with under a shade tree, etc.. All of those small things make REMEMBERING the trip take a long time, but were distraction enough along the way to break the boredom up into tiny fractions that made it feel at the time like it was going fast.

I hope those folks up in the Shuttle are having as much fun. Here’s a hope for a safe (and boring) return.