Mark Boyd, a phred I’ve always admired, has toured all over the world. Even though he’s a high daily mileage tourist, he manages to create journals that are rich in photos and descriptions. Too many cyclists get hung up on mileage, routes and gear, but Mark has the ability to capture the ambiance of the areas he’s passing through.

Because he tours in countries where he doesn’t speak the language or in places where help is a long way off, he’s good at improvising.

Goop is his friend. He uses it to fix everything. I learned from him.

I’m pedaling, but my RPMs are zero

I used to have problems keeping the magnet for my Cat Eye Astrale 8 Cyclocomputer attached to my crank.

I’d be pedaling down the road cranking like crazy, look down and see that my computer was registering zero RPMs. That’s really demoralizing. A closer inspection would show that the little magnet holder attached with a nylon tie had fallen off and there was nothing for the pickup coil to pick up anymore.

Rare Earth Magnets to the rescue

I set off to my neighborhood Radio Shack and picked up a couple of Rare Earth Magnets.

Radio Shack gets a pretty penny for their magnets, but I can buy a package of 30 from Amazon for about 10 bucks.

That’s a lifetime supply. One warning: keep them away from small children. Swallowing them can be deadly.

How do I stick the magnets to the crank? 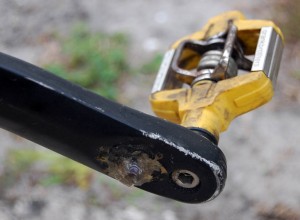 Here’s where Goop comes in. I can’t tell much difference between the different flavors of Goop. Their motto is, “Glues Whatever, Holds Forever.” (By the way, check out their Testimonial page, it’s cleverly done.)

I reached for Goop for Plumbers first, figuring that it would be waterproof, held two magnets against the crank and gave a squirt. Goop is fairly viscous, sort of like silicone or caulking and it dries relatively quickly.

An hour or so later, I hopped on the bike and headed off down the road, not really expecting the magnets to hold on.

If I had known they would stick, I’d have been neater

You can tell from this closeup picture that I didn’t make any effort to trim the excess. Dirt that got stuck while the glue was still tacky is still there a couple of years later. 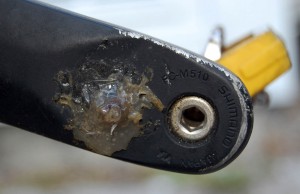 When I replace the crank or the bike, I’ll be a little more careful.

We’ve found Goop to be great for gluing the grandkid’s toys back together. Because it’s flexible, it’s less like to break at the same place.

I’ve been wondering if I could cause some of those slow traffic lights to trip if I’d take that whole box of 30 magnets and Goop them to my bottom bracket.

With my luck, the first time I passed over a manhole cover the bike would come to a sudden stop and I’d go flying over the bars.

3 Replies to “Goop is Your Friend”