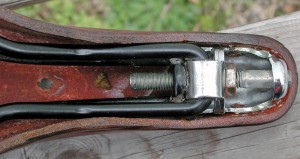 Earlier this year I wrote about how to adjust a Brooks saddle. I mentioned in it that I used a Carradice Saddle Cover from Peter White Cycles to protect it.

You don't normally see cows standing around wearing raincoats, but leather that's off the cow has a tendency to sag when it gets wet.

When they dry out, they can get hard and become, in an inelegant turn of phrase, “ass hatchets.”

Here's what my seat cover looks like when it's sleeping 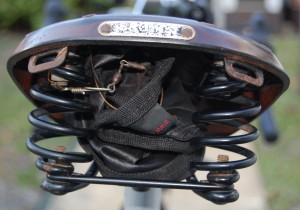 When I was pushing my bike into its home this evening, I realized that I hadn't shown any pictures of what the cover looks like in the wild.

I keep it shoved up under my Brooks Champion Flyer saddle when it's not in use. It's never fallen out, even when it's been on the bike rack tooling down the road at speeds that I won't admit to.

Just to be safe, though

Before I discovered how much it likes living under my saddle, I was paranoid enough to take a snap and swivel fishing leader and attach it to the saddle springs. The leader passes through the two leather reinforced slots that are designed to allow access to the saddle bag loops. 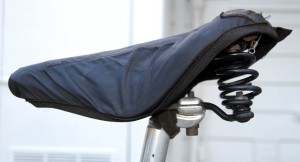 The cover fits very snugly. In fact, the only criticism I have is that the leather reinforced slots are cut a little small and don't go over the metal saddle bag hooks.

I could probably do some cutting and trimming, but since I don't use a saddle bag, it's not worth the risk of making a bad cut.

The cover should be considered more water resistant than waterproof. If I'm going to leave it outside for a long period of time or carry it a long distance on the back of the car, I'll add a plastic bag or shower cap cover for additional protection.

Interestingly enough, even though the cover is slick, it's not as comfortable to ride on as the bare Brooks.