There was a discussion on the phred list this spring about how to make your bike more visible at night. One of the members said that the Graveyard Mall had a cheap alternative to Hokey Spokes for a lot less money.

Hokey Spokes are transparent “blades” that attach to your bicycle spokes. As these blades spin during riding, a computer inside the blades modulates the internal LED lights so that design images and custom text appear.

Long before I ordered the disastrous Lock Alarm from Graveyard Mall, I got suckered into the Wheel Wizard at the bargain price of $4.99. I couldn’t resist ordering four of them. I figured I had some other riders who would love looking like the picture in the web site ad. 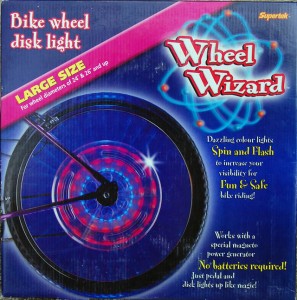 The ad copy made them sound better than sliced bread. Not only are these cool to use and need no batteries, but they also make riding your bike at night safer.

I had pretty much forgotten that I had ordered the Wizard Wheels when a box showed up on the front porch.

I was excited when I saw the picture on the outside of the box.

That excitement died when I saw the size of the Wizard. Holy Cropoli, that sucker is HUGE, more like a time trial wheel than a Hokey Spoke blade. I’d be afraid to put that thing on my bike on a day with a strong side wind: I’d be afraid I’d get blown right over.

It DOES produce light

It’s got some kind of magnet setup that DOES actually produce light when I held it in my hand and spun it, but I’d never consider putting it on my bike. For one thing, I couldn’t get it to fit without using a crowbar on my fork. 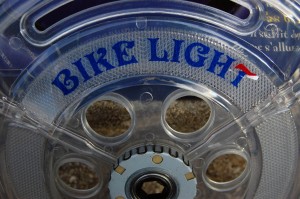 I didn’t send them back

They weren’t what I expected, but for $4.99, I couldn’t expect much, so I wasn’t THAT disappointed.

Unlike the lock alarms, which were total junk, these performed as described, if not as desired.

I have two left. Serious offers entertained. (They make great gag gifts: give one to a friend and watch him gag.)

2 Replies to “Send Wheel Wizard Back to the Graveyard”