I’ve been lazy since getting home from vacation, so I figured I’d better drag the bike out before I forgot how to ride it.

Temps were just cool enough for this Florida boy to put on knee warmers. My left knee protests a bit from mile three to mile 10, particularly if it’s below about 73 degrees. I KNOW, some of you ride in shorts when it’s sleeting, but I ain’t you and I don’t ever plan to be.

Son Matt called to tell me that he had spotted a bunch of recreational riders getting on the Palm Beach Bike Trail, so I headed over to see if I could hook up with them.

I ran into Marley and Hailey instead

Marley and Hailey, 4-year-old twins, were getting their pictures taken at the huge tree just south of the Flagler Museum. They were so cute I had to spend some time with them.

The tree has huge wraparound roots that are so big that they’ll swallow up a child. It’s a great place to visit and there is parking nearby at the Flagler if you aren’t a cyclist.

The gaggle of gals were already at The Inlet

Palm Beach when I rolled up. I’d liked to have found out more about them, but that’ll be for another day. 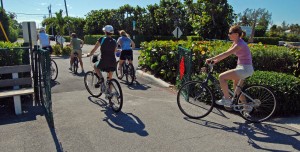 On the way to the trail, I came upon a woman riding north on Olive. We chatted for a few minutes and she asked if I had ever ridden the Palm Beach Trail. I told her that’s where I was headed and invited her to come along.

“I don’t think I can today. I just started riding and I’ve already gone three miles. I should go home.”

I wish I had caught up with her earlier. For a newbie rider, she held her line very well and rode predictably. I did suggest that she not hug the edge of the road as much because it encourages drivers to pass you without crossing the center line. She grasped the concept and moved left about 18 inches.

I should have t-boned the jerk

A block before Worth Avenue, I saw a black convertible starting to edge out into the street. I had a feeling this guy was going to pull out in front of me, so I had my finger on the Delta Airzound Bike Horn. When he crept out a little more, I gave him a short blast, more of a gentle reminder than an imitation of an 18-wheeler. That usually does the job, but not with this yahoo.

If I hadn’t been ready to break, I’d have t-boned him. One of the nice things about convertibles is that they can hear what you call ’em in situations like this. Once the guy realized what he did, he apologized, but I kind of wish I had scuffed his paint a little.