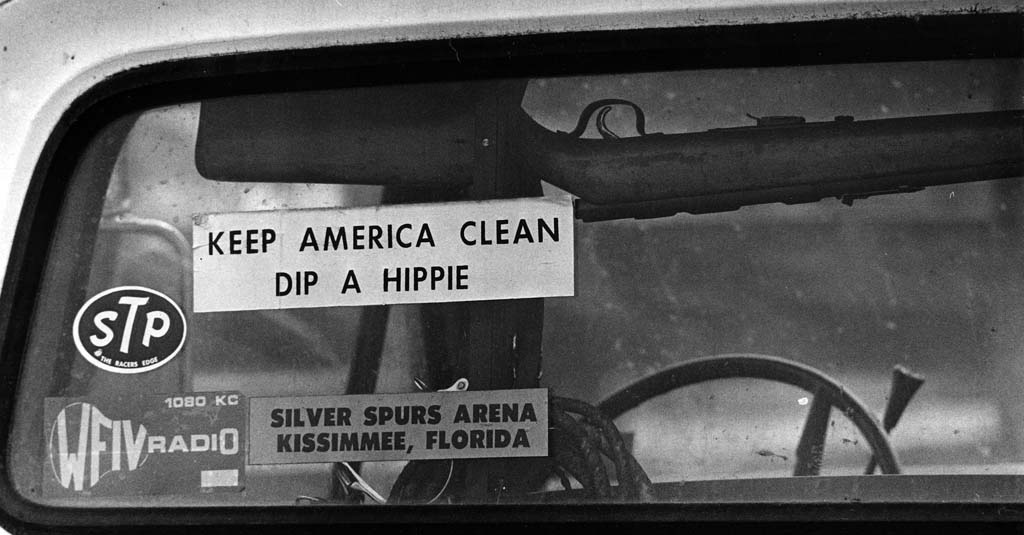 You can tell it’s springtime back home in MO. The Speak Out column (a repository of ramblings for people who can’t be bothered to write a letter to the editor) in The Cape Girardeau Southeast Missourian contained one of the annual rants: “I AM frustrated by bicyclists who use the middle of a road lane. It blocks traffic. Do us a favor. At least ride closer to the edge or bike somewhere else.”

When I sat down for my coffee and cereal, my eye was drawn to a Washington Post story picked up by The Palm Beach Post. Follow the link to see the whole story. It’s worth reading. I’ll steal key parts of it below to place the Speak Out comment in a kind of perspective.

The gist of it was that “drivers of cars with bumper stickers, window decals, personalized license plates and other “territorial markers” not only get mad when someone cuts in their lane or is slow to respond to a changed traffic light, but they are far more likely than those who do not personalize their cars to use their vehicles to express rage — by honking, tailgating and other aggressive behavior.”

“The more markers a car has, the more aggressively the person tends to drive when provoked,” Szlemko said. “Just the presence of territory markers predicts the tendency to be an aggressive driver.”

The key to the phenomenon apparently lies in the idea of territoriality. Drivers with road rage tend to think of public streets and highways as “my street” and “my lane” — in other words, they think they “own the road.”

Why would bumper stickers predict which people are likely to view public roadways as private property?

Social scientists such as Szlemko say that people carry around three kinds of territorial spaces in their heads. One is personal territory — like a home, or a bedroom. The second kind involves space that is temporarily yours — an office cubicle or a gym locker. The third kind is public territory: park benches, walking trails — and roads.

Drivers are in public AND private territory

Unlike any environment our evolutionary ancestors might have confronted, driving a car simultaneously places people in both private territory — their cars — and public territory — the road. Drivers who personalize their cars with bumper stickers and other markers of private territory, the researchers argue, forget when they are on the road that they are in public territory because the immediate cues surrounding them tell them that they are in a deeply private space.

“If you are in a vehicle that you identify as a primary territory, you would defend that against other people whom you perceive as being disrespectful of your space,” Bell added. “What you ignore is that you are on a public roadway — you lose sight of the fact you are in a public area and you don’t own the road.”

Oh, and, by the way, it doesn’t matter whether the bumper sticker is a warm and fuzzy “Have a Nice Day” or in-your-face like the one above I shot in the 70s in central Florida. They both feed your sense of territory.

Hmm, now that I think of it, I have a Florida Share the Road license tag on my car.