As I pull my kid around in his bike trailer, other cyclists pass me as though I am stopped on the side of the road changing a flat. I console myself by counting trailer miles twice.

Ten miles pulling the trailer should go in the log book as 20 miles, right? That’s my rule of thumb. Calories burned per mile? Double that, too!

The truth ain’t that far off, the math is fairly simple, the variables, however, make this a matter best left for scientists and philosophers.

Calories burned per pound per mile ridden is not a linear function — going from 15 miles an hour to 30 miles an hour doesn’t double your calories burned. Drag is proportional to the square of speed. Thus overcoming drag at higher speeds results in far more calories being burned. Just trust me when I say Aerodynamic drag is complicated and let’s do some examples

Calories Burned While Pulling a Trailer

My nearly four-year-old son clocks in at 45 pounds. His trailer weighs about 30 pounds. He has another ten pounds of toys, snacks and drinks. That means I’m hauling around 85 more pounds.

Since I’m positive I’m not going 25 miles an hour while pulling the bike trailer, let’s isolate just that 85 pound load at 15 miles an hour…

That means it takes 40% more energy to pull the trailer than to just drive myself around, all else being equal.

For a lighter biker, the trailer is a larger percentage of the total weight involved in the trip. As such, the lighter the rider, the more meaningful the increase in calories burned while pulling the trailer.

Why This Calculation Isn’t Right

The above calculations don’t consider the shape of the trailer. All they are doing is making the cyclist fatter. I’m sure even a fat biker is more aerodynamic than a box-like trailer. These calculations also don’t consider that there are two more tires in the mix affecting both friction on the road and the tires’ rotational momentum. Add in a head wind or tail wind and you’d have to recalculate. These numbers also only apply to flat rides. Add in some hills and you’re on your own.

My Bike Gets 517 Miles Per Gallon

As I noted above, I burn 60 calories a mile when pulling the trailer. 31,000 divided by 60 is about 517 miles per gallon. Keep that in mind the next time that coworker talks about his Toyota Prius.

Just Double Up and Call It a Day 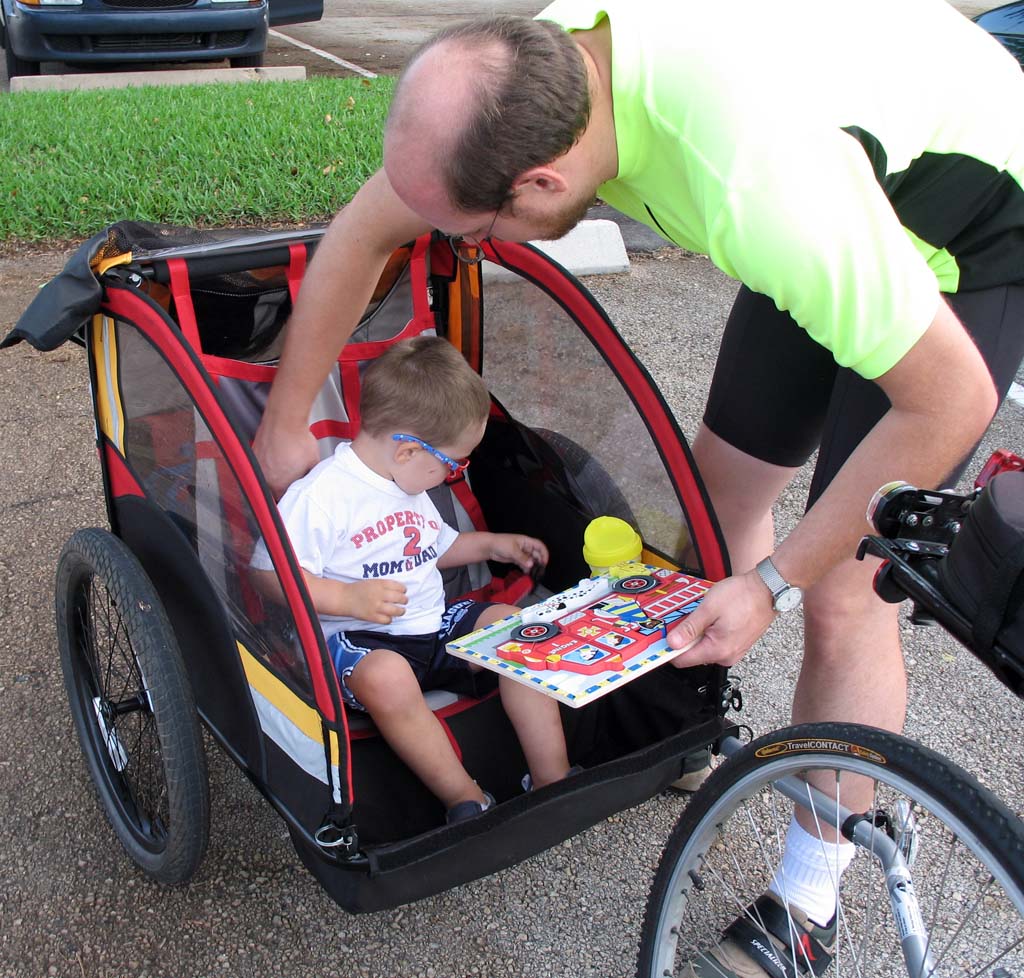 Fortunately, riding with the kid in the trailer makes me feel twice as good so it all averages out in the end.

11 Replies to “Calories Burned While Pulling a Bike Trailer”