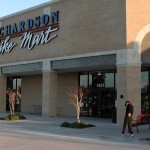 A whole bunch of years ago, I rented a bike from Richardson Bike Mart (where Lance worked as a kid) while I was on a business trip to Dallas. Good folks. I ended up buying my used Trek 1220 from them.

Figuring I’d need to tweak it, I bought a Pedro mini-tool that contained seven fold-out allen wrenches from 1.5 to 6mm housed in a bright yellow handle.

It fit almost everything on my bike

I kept it in my CamelBak MULE and I can’t begin to think how many times I’ve told someone riding with me, ” Hold on, I need to pull out my Pedro.” (Once they found out that “Pedro” was a bike tool, they seemed to look more comfortable.)

My buddy, Keefer, has reached the point where he has more bikes than room. “Two bikes hanging in the living room are art. A third bike blocking the dining room table is a nuisance.” That doesn’t count the two bents he has chained outside his apartment.

The orphan is a Cannondale T800 touring bike. Ever since my Trek 1220 has been showing its age and I saw a Surly Long Haul Trucker in Cape, I’ve had bike lust. Keefer had long ago promised to leave me the T800 in his will, but now he was willing to part with it for a small amount of money. 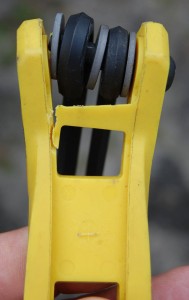 I hauled the bike home. The rear tire was flat, so I had to take care of that. Saturday morning Keef and I were going to hook up for a test ride. On the way out the door, I realized that I was going to have to swap my Crank Brothers Candy Pedals over to the other bike.

After all these years, I was pretty sure I knew how much torque the Pedro would handle.

Now I know for sure.

It’s less than this.

Right about the time I thought I was getting close to the limit, I felt that sickening OOPs feeling that indicated that I had gone past it.

It was time for a quick trip to Wayne

He didn’t have a Pedro in stock, but he sold me a Park Tool AWS10 that could have been Pedro’s brother. I like the yellow color better, but…

Wayne has a monster pedal wrench with a three-foot cheater handle, so I let him do the pedal swap. 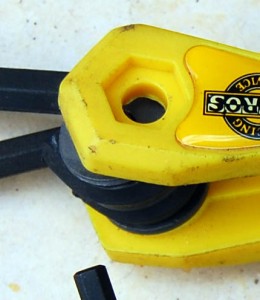 In fairness to Pedro

I’m not sure the tool failed because of torque.

It looks like the nut holding the sides together may have come off. I didn’t see it in the yard, but no telling when and where it may have vibrated off.

That would have caused the plastic case to split when I applied the pressure. 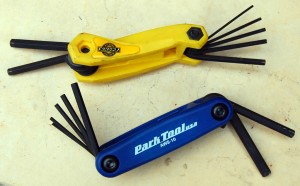 Here’s what the new and old tools look like

So, I guess you’re wondering how the T800 rode.

Well, I adjusted the seat three times in the first 50 feet and tweaked it at least a dozen more time in 20 miles.

It was cheap version of one of those fancy split saddles that are supposed to keep your private parts happy.

Give me back my Brooks

That thing must have had sandpaper on the edges because I was flat rubbed raw. I felt every bump.

Once I got the seatpost up about where it needed to be, then the bars were too low. I woke up in the morning with back, shoulder and hand pains that I don’t normally have, particularly from a leisurely 20-mile ride.

On the positive side, it felt faster than my old bike, even with a headwind, and shifted smoothly.

Going for a fitting

I’m going to set up an appointment with an LBS for a real fitting to determine if this bike can be made to fit me or if I should pass on a great deal (money-wise). To quote someone wiser than me, “The most expensive bike is the one that doesn’t get ridden.”

It IS a sharp-looking bike. 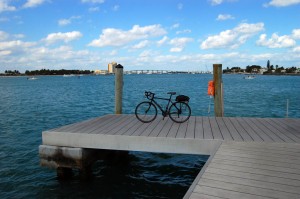 That was taken at the north end of Palm Beach, FL, looking at Peanut Island and the Blue Heron Bridge.

We, obviously, have different perspectives.

3 Replies to “Determining How Much Torque is TOO Much”