Two pieces I’ve done recently have struck a chord with readers: Shoot a Cyclist for Safety and an account of a crash on A1A in Delray Beach where witnesses said a motorist turned in front of a cyclist who had a green light.

Cyclists are outgunned (literally in some cases, as the stories above show).

Motorists have AAA, developers, oil companies and others with big bucks pushing their agenda, but cyclists are such a fragmented group that WE can’t even agree on what we want.

And, to be honest, most of us would rather ride our bikes and complain about bad drivers than do the dull work to make things better.

The FBA, incorporated as a non-profit in 1997, sets as goals:

FBA is a great resource

Board of directors have a juggling act

The Board of Directors met in West Palm Beach. I never appreciated the juggling act that goes on between bicycle groups, cyclists, law enforcement, state agencies and everyone else until I sat through a full day of discussion.

The FBA works hard not to step on the toes of other cycling groups with their own agendas. They also have to figure out how to represent the views of cyclists who want money spent on multi-use paths vs. bike lanes vs. pure vehicular cyclists who say we have a right to the road and don’t need any special accommodations.

Here are the minutes

To give you an idea of how much stuff they cover (and, in some cases how it falls into the Dull But Necessary Category), I’m going to post some of the minutes of the meeting along with pictures of the members and some of the presenters.

Congratulations to new board member Stephanie Striefel of Delray Beach. Thanks to Raphael Clemente for many years of service to the Board. Though he has stepped down from the Board, we will keep him involved as much as his schedule allows. He has been a major source of energy, enthusiasm and our connection to the racing community. Don Braverman stepped up to the VP position vacated by Raphael. Stephanie jumped into the fying pan right away by taking on the Secretary position vacated by Don. David Henderson and Steve Diez remain in their officer positions of President and Treasurer respectfully. Jodi Hohlstein of Orange Park attended as a potential member of the Board

David appointed a nomination committee of Mike Lasche, Mighk Wilson and Laura Hallam to review current Board and Advisory member positions for renewal at the next board meeting to be held in October. David appointed a subcommittee of himself, Don and Stephanie to review the Bylaws and Policies & Procedures manual.

What do we fight for?

David appointed a 2010 Legislative Strategies subcommittee of Mike, Mighk, Dan Moser, George Martin and Laura Hallam. A survey will be distributed to the membership/FBA News list to rank their top three initiatives based on the seven or eight reviewed at the meeting.

[Note: I found this the most enlightening discussion of the day.

Determining what you want to fight for is a careful balancing act. You don’t want to open a can of worms in some cases by asking for a wholesale review of state statutes dealing with cycling, for example, because you could lose more than you could gain.

A proposal to require law enforcement officers to fill out a long form for every bicycle incident sounded good from the standpoint of collecting statistics, but it may get opposition from LEOs without really accomplishing much in the long run.

Passing laws to prevent cyclists from being harassed by motorists has been a flashpoint for yahoos (see Shoot a Cyclist for Safety) in some places where it was tried. It also makes cyclists “special” when the goal is to make bicycles just another vehicle on the road.

It’s not all as simple as it sounds.]

A Bike Ed Rebranding Powwow will be held in Orlando 8/22/09. Mighk and Keri Caffrey will lead the discussion.

The next board meeting and annual meeting will be held in October in either Orlando or Mount Dora. Annual award presentations will also be made and/or presented at the local level based on the locale of the recipient.

Jeff Hohlstein will be the director of the First Coast (Duval, St. Johns, Nassau, Clay) Chapter of FBA – the first chapter of more to come based on finding champions to further our mission at the local/regional level. 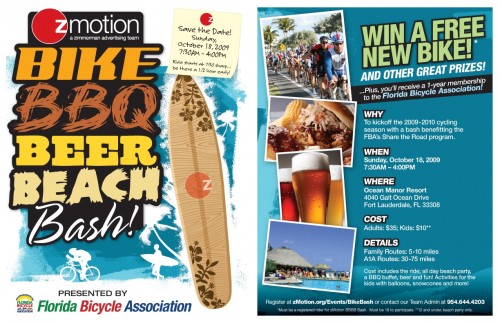 The Lake County Bike Summit/Rally will be held 10/10/09 in Mount Dora in conjunction with the Mount Dora Bike Fest.

Rick has asked FBA to take the lead in promoting the Summit/Rally. Based on this request, it might be a good idea to shift the date and location of our next board meeting and annual meeting from 10/24-25 in Orlando to Mount Dora since we’ll have a captive audience of Mount Dora Bike Fest participants.

If you’re in agreement, I’ll work out the logistics but it makes sense to have the Summit/Rally and Annual Meeting Saturday, 10/10, in the mid to late afternoon while MDBF participants are hanging around the headquarters area. The board meeting could actually still be held in Orlando Friday, 10/9, evening or in Mount Dora. LET ME KNOW YOUR PREFERENCE ASAP PLEASE.

2 Replies to “Florida Bicycle Association Looks Out for Cyclists”