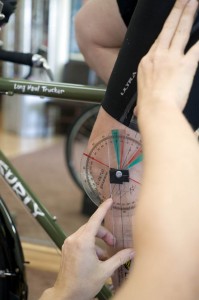 Son Matt and I journeyed to The Racer’s Edge in Boca Raton, FL, this afternoon to pick up my Surly Long Haul Trucker. It wasn’t exactly naked: it had a Surly Nice Rack on the front, a Cateye Strada computer and a set of Planet Bike fenders fore and aft.

Fitter John Palmquist, who did my pre-order fitting already had my bike somewhat in the zone waiting for me.

Just like the first time, John was working to get the right seat height. I would pedal for a minute or so, he would measure the angle of my knee and have me step off.

He’d raise the seat a bit and we’d repeat the process. Gradually my pedaling became more efficient and the seat became substantially higher.

The handlebars were now quite a bit lower than the saddle, which isn’t my favorite position.

“Don’t worry about it”

“Don’t worry about it,” he assured me. “We’re going to get the seat adjusted first, then we’ll start to work on the upper body. If we did it the other way around, we’d have to do the handlebars twice.”

Fore and aft comes next

The next step was to figure out the right fore and aft position of the saddle. It was getting closer, but something didn’t feel exactly right. I ride on a leather Brooks saddle which takes on the shape of your bottom the more you ride it. (No, it’s not exactly like siting bare butt on a copy machine, but there ARE a couple of dimples in the leather where your sit bones dig in.) It took about three adjustments to get it about right.

Sure enough, after watching me spin the pedals a few more minutes, he had me get off for one last tweak. He thought the nose of the saddle should go up just a hair. And that was it for the saddle. 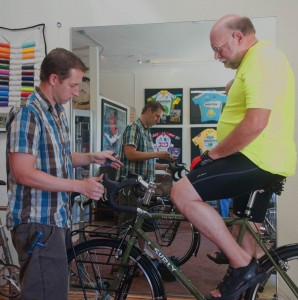 John started off by raising the stem until the bars were just lower than the saddle. It was close, but not exactly right.

Then he loosened the bar and rotated it slightly backwards so the brake hoods were just a little closer.

What should I twiddle with?

While he was writing up the bill (which came to less than I had feared originally), I asked him what minor twiddling I should expect to do once I got it on the road.

Paraphrased, he said, “Don’t touch it.”

Son Matt suggests that I should leave my tools at home to help me resist temptation. 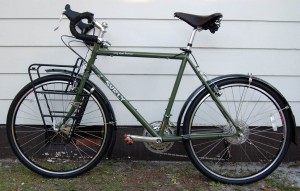 Everything visible is stock except the front rack, pedals, Brooks saddle and fenders.

I’ll put on my old rear rack, lights and other stuff tomorrow.

Wayne was supposed to work on building a wheel around my SON generator on Sunday, but his shop was closed Sunday afternoon and today. I hope he isn’t sick.