Today is going to be a potpourri of stuff that didn’t fit in anyplace else.

My Surly LHT had a sinking feeling 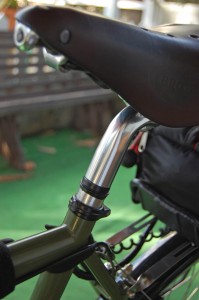 I mentioned that fitter John Palmquist told me that my bike was dialed in and that I shouldn’t be tweaking it. I was a good boy. I didn’t tweak.

On the other hand, I was riding with Jim Beloian the other day and observed that “the saddle feels just a little bit too low, which is odd, because I thought it was OK for the first 100 miles.”

“Just mark the position before you make any changes,” Jim suggested. “That way you can back to your starting point.”

“Beat you to it,” I countered. “I didn’t have a marker with me the other day, so I put a wrap of black electrical tape around the seat tube to mark it. See?”

That’s when I noticed that the tape was compressed about half an inch. The seat post must have slipped over time. Since I was going to follow John’s advice, I replaced the quick release seat binder with the factory model that came with the bike before making any adjustments

I raised the seat about half an inch and have been dinking with it in about 1/16″ increments until it feels just about perfect. Just goes to show that you really can tell if something is out of whack. 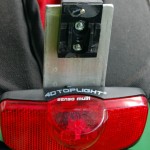 Reader in the Wild Mathilde and her friend from college, Beau Garrido, came over for a ride Monday. She’s going to do a triathlon next weekend and I wanted to see if one of my bikes would fit her. She’s currently riding an old beater bike with a rear wheel that wobbles like a drunken sailor, and the whole thing is not-so-slowly being devoured by rust.

While I was pushing my bike off the porch, the screen door slipped out of my hand and must have popped the RealLITE taillight in just the right (wrong?) place and snapped it right off.

Fortunately, I have a spare, so I’m back in business.

Let’s see if the warranty is as good as it says. (In fairness, I murdered another one several years back and got a replacement back (since that’s all I needed) in a few days.

We stopped at the beach for the obligatory picture

It was a windy day, with gusts over 20 mph, but my Click-Stand did a great job of holding up the bike. I did notice once when I reached for the barend shifter that one of the brake bands had slipped down so far it was almost falling off. I think that’s one of the few problems I’ve had with the stand.

When I got home BOTH brake bands were gone

Tom Nostrant gives you three brake bands when you buy a Click-Stand, so I had one spare, but I figured out that left me one band for two brakes and no assurance that buying more wouldn’t be throwing good money after bad.

Bungee cords were too long. Innertube pieces looked like too much trial and error. When all else fails, what is there to do but to reach for the roll of Velcro. [Note: most of the Amazon ties at that link were 8 inches long. That may be too short for most brake levers. I used a strip that was 11-1/2 inches long and 1/2″ wide.]

When I was a kid, the answer to everything was binder’s twine and bailing wire. Today it’s Velcro 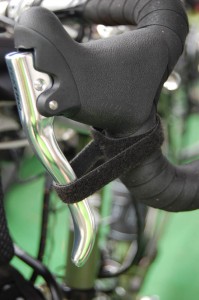 Here’s what it looks like on the brake levers

I put the loop around the inside of the handlebar drops. It cinched down tight enough that there’s little danger that it’ll slip down like the supplied bands. It’s long enough that there’s plenty of overlap, so it’s unlikely to come loose. It’s also faster and easier to slide over the brake levers than the bungee-style bands, which were a bit of a struggle for me.

Winding it up made a bit of a wad

On the first pass, I wound the strap up on itself when it wasn’t in use. I didn’t like that. Because it sticks so tightly to itself, it was hard for me to find the end to unwrap it. It also made a pretty big wad inside the drops. I don’t find myself riding in that hand position often, but I was sure I’d find it annoying. 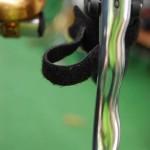 The solution was to tack the end of the strap to the body, leaving a big loop hanging out. It’s back out of the way and my handlebar bag pretty much hides it.

If you have a Click-Stand and don’t have a Velcro strap to try, drop me a comment and I’ll mail you one as long as my supply lasts.

7 Replies to “My Surly LHT Gave Me a Sinking Feeling, I killed My RealLITE and Other Tragedies”