If you want to start an argument on a bicycle touring list, ask the question, “Which is better panniers or a trailer?” The world is divided into two groups, trailer cyclists and pannier cyclists and each group is passionate about his or her choice.

Back in February 2002, on a ride from West Palm Beach to Hobe Sound, FL, and back, I ran into Phil the Knife Sharpener near the Riviera Beach FP&L power plant.

Phil, it goes without saying, is a trailer guy. Phil is a Big Trailer Guy in more ways than one. 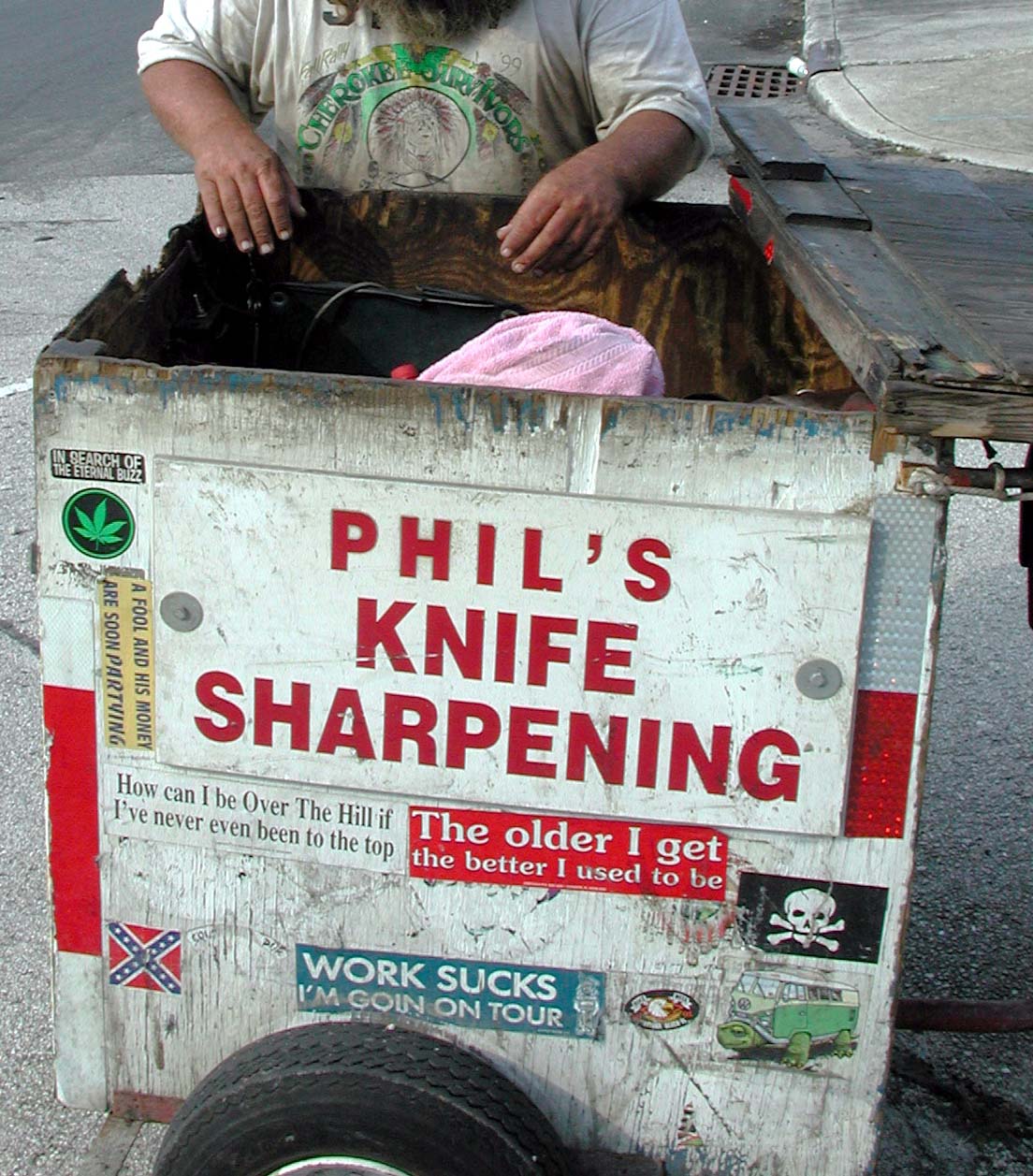 I asked him where he was headed.

Where did you start?

Where you going after Key West?

At that point, I said, “We have to talk. How MUCH does that trailer
weigh?”

How hard is that thing to pedal?

“I’m in a mid-range gear right now, give it a shot,” he offered.

I climbed on the beast, stood up on the pedals and went…..nowhere. Zip, nada, zilch.

“That’s what happens most of the time someone tries that,” he laughed, reaching down and lifting the trailer straight off the bolt that held it to his frame. 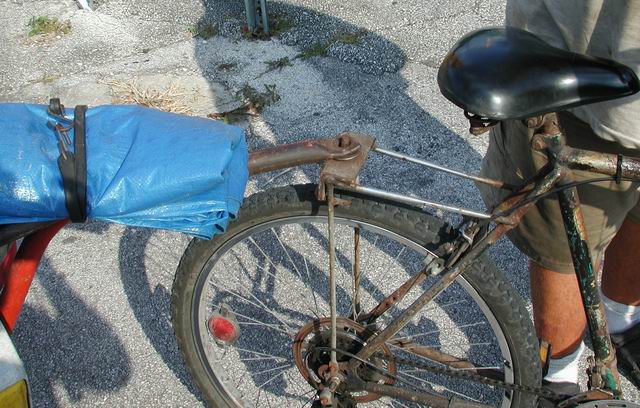 “Does that thing ever pop off when you’re riding,” I asked?

“Yeah, a few times. Once I was going down a steep hill doing about 40 miles per hour riding the brakes when I hit a speed bump. The trailer popped off. When the load came off, then the brakes grabbed hold and the trailer tried to pass me. This trooper saw things start to get interesting and asked if I was hurt. ‘Yep,’ I said. He wanted to know if he should call an ambulance. ‘Yep,’ I said. He wanted to know if I wanted to get down off my bicycle. ‘Nope,’ I said. ‘I got a broken leg.'”

Phil said he had ridden about 250,000 miles in the last 18 years, most of them on the beater bike and trailer he was riding here.

When we approached the Port of Palm Beach flyover, a fairly good grade for these parts, I said, “I don’t get much hill climbing experience down here, so I hope you don’t show me up too badly.”

Understanding why he didn’t exactly zoom up the hill, I still had to ask how the heck he managed to make it over the Rockies. “It takes me about three days to push the bike UP the mountain, but only about two hours to go DOWN it.”

He then went on to tell a story about how he drafted an 18-wheeler down the side of a mountain at speeds that stripped the gears in his mechanical speedometer. When the truck driver finally pulled over, he came back to check his rig. He looked at Phil and said, “Geez, I passed you 50 miles back. What are you doing here?” “I’ve been drafting you. Just how fast WERE we going?”

The truck driver said he had hit 85 mph at one point. [I suspect a large grain of salt might be in order here.]

Phil makes his money sharpening knives. “I love those little towns in the Midwest with about 200 people in them. I’ll stop in the downtown area and sharpen some farmer’s pocketknife so sharp that he don’t know he’s been cut until he sees blood. Before long, half the town is running back into their homes to round up all their knives.”

On the way back south, I ran into Phil, still plugging away northbound at 4 mph.

One hint if you run into Phil on the road: ride upwind. 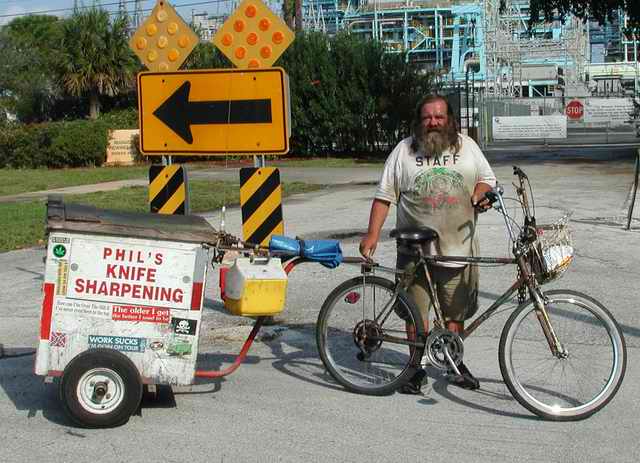