I went on my first Critical Mass ride a week ago Friday in West Palm Beach. 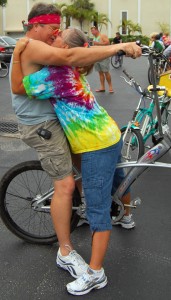 Not to be too critical, it wasn’t much of a mass. A grand total of five riders showed up, including me and two riders who came with me.

We had a fine ride, nonetheless. We rode at a leisurely pace, obeyed most of the traffic laws (we coasted through a couple of stop signs when there were no other vehicles around) and had some pleasant chats.

I’m not sure I’m a fan of Critical Mass

Most stories I’ve read about Critical Mass in other cities emphasize the confrontational aspect: to clog the streets at rush hour just because they can. Instead of making allies of motorists, I think they reinforce all the negative stereotypes of outlaw cyclists.

I like the Freakbike Militia’s Summer of Love Approach (left), which leaves motorists, riders and passersby with a “wow, that’s fun” feeling. 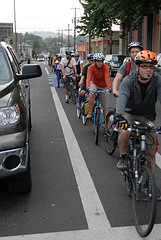 What’s the deal about Portland and biking?

Jonathan Maus does an excellent bike blog, where a reader described a bicycle traffic jam he ran into on the way to work. [Thanks to Jonathan for permission to use these pictures.]

“I encountered a bike traffic jam this morning as I was heading west bound on Hawthorne approaching the Hawthorne Bridge. I found a line of bikes that extended the entire block of Hawthorne between SE Grand and SE 6th and more bikes were backing up behind me.

I had to wait for a second cycle of the light.” 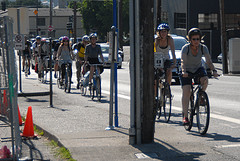 Jonathan pointed out in an earlier story that bike traffic at one intersection had shown a 30% increase in 2008 vs. 2007. There were 2,750 bike trips logged by the Bureau of Transportation in 2008. Car trips hover around 6,300.

If present trends continue, he projects that it won’t be long before bicycles make up half the trips in the corridor.

It may be time, he suggests, to reconfigure this particular road to reflect the changing transportation patterns.

It seems like PBOT might want to consider putting N. Williams on a diet. It could stand to lose a few feet of car space. How about taking it down to just one motor vehicle lane, one bike/bus shared lane, and then the on-street parking lane?

The Critical Mass cycling movement takes its name from physics, where a critical mass “is the smallest amount of fissile material needed for a sustained nuclear chain reaction. The critical mass of a fissionable material depends upon its nuclear properties, its density, its shape, its enrichment, its purity, its temperature, and its surroundings.”

And that’s what’s happening organically in Portland. The riders pictured above aren’t part of a group ride; they’re not part of a “cause.” They are regular folks on their way to work or go shopping.

At some point, they are going to reach critical mass (small letters) or a tipping point where the city is going to have to allocate them more space than the tiny bike lane pictured.

If you’d like to join the West Palm Beach Critical Mass ride, show up at the fountain at the east end of Clematis Street (where the old library was) on the last Friday of every month at 7 P.M. and look for bicycles.  (Or bicycle, in our case.) Even if there’s no mass, you’ll probably run into some nice folks to ride with.

One Reply to “Portland Has Achieved REAL Critical Mass”