August 12, 2008, nearly 300 employees left Palm Beach Newspapers, Inc., under a “Voluntary Separation Program.” Before the end of the year, another 300 employees would be cut, leaving the newspaper at roughly half its size a year earlier. 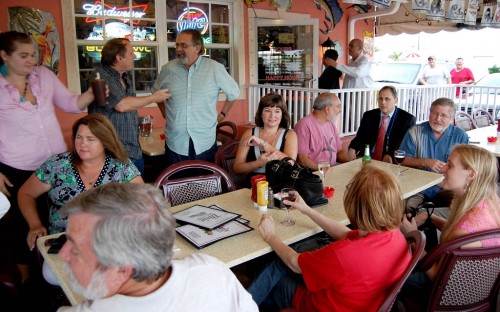 I worked at The Palm Beach Post 35 years as a staff photographer, director of photography, editorial operations manager and telecommunications manager. I agreed to stay on an extra couple of weeks, after the first wave of folks left, to clean up their phone and voice mail programming, so you won’t get to hear about the anniversary of my new life until after Sept. 1. [Here’s a link, as promised.]

Eliot Kleinberg, a reporter who is still working, decided that we should hold an annual reunion on August 12 of each year to see how everyone is doing.

Eliot is one of the The Post’s most inquisitive and prolific writers. He’s written nine books on Florida lore and has forgotten more of the state’s history than any 10 of us knows. He and I worked together dozens of times.

One story stands out in my mind, though. He and I were to go to Fort Jefferson in the Dry Tortugas to meet up with the family of Doctor Mudd, who was convicted of conspiracy in the assassination of Abraham Lincoln. The family has been trying to clear the doctor’s name for decades.

You have two practical choices to get to Fort Jefferson: a slow boat or a slightly faster seaplane. We elected for the seaplane. I have to share with you that Eliot is a hell of a reporter, a good writer and a fountain of story ideas. He can also be annoyingly perky and bubbly.

Only one of us will be here in the morning

Just before the seaplane pilot took off, stranding us on the island, I told him, “You had better be sure to come back tonight to pick us up. If you don’t there may be only one passenger to take back in the morning.”

The pilot came back, as promised, Eliot wrote his story, I delivered my pictures and Dr. Mudd’s name is still mud, alas.

Listen to Eliot on the video. He’s a true newspaperman with ink in his veins. He told me that he wants to be found face-down on his keyboard when it’s his time to go.

Listen to Eliot at the end of the video

Some of the folks resort to gallows humor in the video, but every one of them has better than 20 years in the business. You don’t log that kind of time if you don’t love it.

Jan Norris, former food editor, mother hen to what she named The Post 300, and publisher of jannorris.com is the glue that sticks the group together. She had the foresight to collect personal email addresses of all the folks who wanted to keep in touch. She shares any job leads she hears about, passes on news and rumors. If she spent as much time keeping her other website, wewereprint.com up to date, she’d have one of the best media blogs in the country. (That’s something I nag her about.) In addition to that, she’s a long-time friend and sometime riding partner.

Here’s what it looked like when she cleaned out her office and walked out of the newspaper last year.

Mary Kate Leming and her husband, Jerry Lower, a refugee from The Sun Sentinel, decided that maybe Big Newspapers couldn’t cut it these days, but there was a market for smaller, niche newspapers. They founded The Coastal Star, to cover the coastal communities south of Palm Beach.

With the big dailies cutting back on their coverage and with a pool of experienced freelance journalists available, The Star has exceeded expectations. There’s a chance that we may see The Coastal Star expanding its coverage area. They just made arrangements to move out of the house and into a formal office.

Chuck Keefer turned me on to computers

Charles Keefer, AKA Chuck or Ceekay, sold me a Tandy TRS-80 Model 1 computer, one of the first consumer-grade computers on the market. It came with Level II BASIC, 4K of RAM and required you to type in your programs from the keyboard every time the computer was turned off.

Then he sold me a 300-baud Hayes modem that opened up the world of computer bulletin boards to me. The Internet, of course, was still a dream.

When I was cleaning out my office, I ran across a clip of a story we had done covering Ft. Lauderdale’s Spring Break back when it was still a Big Deal.

I was standing on a bed in a beachfront hotel shooting a bunch of college boys doing what college boys did back before Girls Gone Wild. (Mostly drinking and DREAMING of Girls Going Wild.) A bunch cops charged in the room and started giving the boys a royal ration and trying to scare them into admitting they had a ton of dope stashed some where. One of them noticed me and started to get his cop on.

I motioned for him to go outside. “Look, I know you have to go through the drill to make the hotel manager happy, but we both know you’re not going to bust anybody unless they get seriously out of line. I’ve been with these kids most of the evening. They’re not being all that rowdy, and I haven’t seen ’em doing any serious dope. How about we both go back in there and do what we have to do without making a big deal out of it.”

After huffing around a little bit, he must have seen the logic of my argument. He went back, made “I don’t want to have to come back here tonight” noises and moved on down to rooms that weren’t lucky enough to have reporters visting them.

Glenn Henderson was a bureau chief in Stuart, one of The Post’s far-flung remote offices. Just before his staff was reduced to a total of two, the bureau had taken over a whole new bay in the suite of rented offices. My telecom staff spent weeks rewiring the facility and pulling in extra services.

Glenn was one of those solid, competent pros you liked working with.

The Post gave those taking buyouts two weeks of pay for every year we had worked, up to a maximum of 52 weeks. The catch is that the paper wanted to take the full financial hit in 2008, so many of us found ourselves in tax brackets we had only dreamed about. Glenn, who was dealing with a kid in college, ran into another problem: that much income all at once made the family ineligible for scholarships based on need.

He started a communications business, but has found that some of the clients he was working on have dried up along with the economy.

Most of the folks I’ve mentioned had bylines. You may have read their stories or seen their pictures. There is another group of folks (at least in the Days of The Dead Trees) who read the copy the reporters turned in for accuracy, spelling, grammar and clarity. Others would lay out the paper, deciding on where the stories would run, how long they would be and what the headlines would say.

Gary Brown was one of those behind-the-scenes guys who jockeyed copy around. When I got into the business, your story was touched by a whole lot of people before it got thrown into a puddle.

They even had proofreaders whose actual job was to make sure that the type that was set was the same as the copy you handed the typesetter. In real life, they’d bend the rules to save you. The nice ones would come over and say, diplomatically, “This copy looks like there’s a smudge on it. The typesetter read what I THINK you wrote as Mayor Hiller as Mayor Hitler. Which is right?”

Modern technology, particularly in the web world eliminates those safeguards and filters (and jobs). The person writing the story may be the only one who touches it before it’s launched to the world.

That’s why Gary says he’s just about given up on print after sending out 500 resumes and getting zero response.

Every office has (had) a Ron Hayes

Just listen to the video. You’ll see what I mean. A lot of people used an A-word to refer to him. Acerbic is the one that could be printed in the paper.

I’m sorry I didn’t have a chance to get around to seeing everyone who showed up.

I’ll have more war stories when the anniversary of my departure comes up, and I’ll publish photos of our press and production crews closer to the end of the year, which will be the anniversary of The Post farming out its printing to the Ft. Lauderdale paper.

[Editor’s note: Jan Norris thinks I should add the following to Ron’s description. Since I agree, here it is:

When it gets to Ron Hayes — A-word is OK.  But please add a line to the effect that he was and is one of the most passionate about the news business (the alter-dark side of Eliot) — and was the one reporter who never failed to hold up editorial and newsroom ethics to the same scrutiny as we gave those we covered. The entire newsroom respected him – despite his cynicism – for speaking up.

Ron also weighed in: Is it true you can’t print “amazing” on your website…?

I should start a poll of Ron’s coworkers to see where “amazing” fits on their list of a-words. Nah, I think I’ll skip that.]