First of order of business today was getting the van (mostly) empty. The main drag in Cape Girardeau was shut down for the university’s Homecoming Parade, so that caused some delay. After we dropped off the boxes of magazines at Annie Laurie’s Antiques, which has a new web page, by the way, the van was much happier.

My Surly Long Haul Trucker breathed a sigh of relief, too, when it was freed from its tight quarters. The racks did a good job of keeping it from getting squeezed.

Our next stop was the Cape Girardeau Conservation Nature Center, where Wife Lila’s sister was doing pastels as part of a Participating Artisans program. 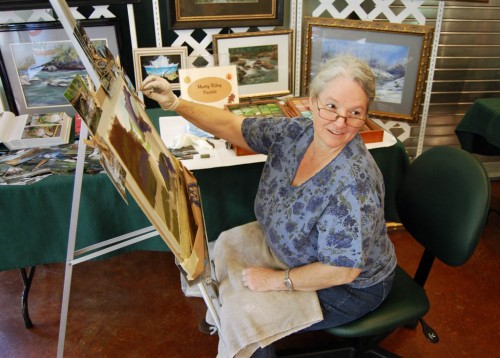 I confessed last week that I was no artist, so my admiration of folks who can translate imagination to ink, paint, paper or stone is boundless.

In addition to traditional artists, there was a man demonstrating flint knapping, a woman doing wood burnings and some guys doing chain saw carvings.

Cape Girardeau Conservation Center is a great use of tax money

I’m not sure that I had ever been to the Conservation center, even though it’s probably only about three miles from the house where I grew up. If you’re in the area, particularly if you have kids with you, it’s well worth a stop. They have an interesting mix of stuff going on all the time. Check their web site.

Almost every exhibit has some kind of hands-on activity, and the folks staffing the place are friendly and knowledgeable. (My mother said she was going to ask someone there if squirrels blinked, because she had never seen one do it. The answer, she found, was that, yes, squirrels blink.)

You can’t miss with cute kids and violins

On the way out the door, we spotted little kids (like maybe six years old) carrying tiny violins. 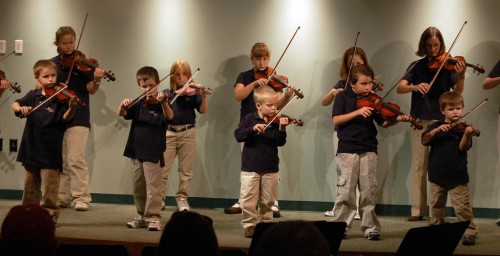 They were from the Southeast Missouri Music Academy Suzuki Strings. The little kids were deadly serious about their playing, as you can tell from the expressions if you click the photo to make it larger.

The kids put on a nice musical performance less than 75 feet from the fellow doing the chain saw carvings, aquariums holding a hovering gar and a huge Alligator snapping turtle. Not exactly what you would expect from a conservation center, but it shows the variety of activities it supports.