Lake Okeechobee Scenic Trail (LOST) is one of my favorite places to ride. Here’s an unofficial map I put together to show which parts are paved, which parts require you to go on surface roads, trail heads and access points, and a few places to eat.

I plan to do a much more comprehensive piece on the LOST, but I’ve had enough recent requests for information that I thought I’d put this up as a stop-gap.

I encourage you to click on the link to a larger map. It’s easier to see in a new window.

The blue lines represent the paved portion of the trail. The red lines show where you have to exit the LOST and get on public highways.

The roads are good riding

If you are reasonably comfortable riding in traffic, then you should have no problems with the roads around Lake Okeechobee.

You are isolated on the LOST 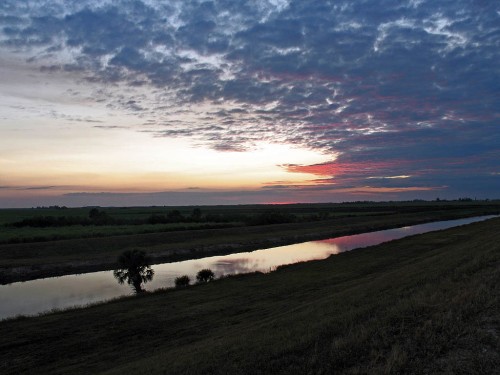 Once you’re up on the dike, you may have to ride seven or more miles to get to an access point because you have the lake on one side and the rim canal on the other.

There are no restrooms on the dike, no food, no services, so be prepared. There ARE primitive camp sites around. Before the authorities cut all the non-native trees and bushes, the campsites were relatively hidden. Now they are wide open.

What all all those blue markers?

I’ve tried to mark all the trail heads and access points I can remember. Some of them may not allow a motorized vehicle to pull in, but they are places where you could reach a road on your bike.

Don’t count on anyone recognizing the names I’ve given those access points. They are just what I call them, usually based on some geographical feature. 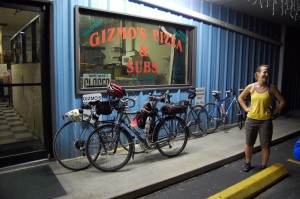 I’ve also marked a few places around the north and east side of the lake to eat. I highly recommend The Office bar at Nubbins Slough, Gizmo’s Pizza & Subs at Taylor Creek and the Golden Corral’s all-you-can eat buffet in Okeechobee. [Note Gizmo’s is no longer in business. I hated to see them close.]

I also mark the Scottish Inns in Okeechobee as an inexpensive, clean place to stay. Don’t expect a chocolate on your pillow, but the folks running it are nice and I’ve had a decent night’s sleep there. It’s not a place to park your spouse for the day while you’re out riding, though. The rooms are tiny by today’s standards.

Be careful out there

My riding partner, Mary, and I used to ride without helmets on the LOST because we thought we were more likely to have heat stroke than head injuries on a trail with no motorized vehicles and no obstructions to run into. Mary, for no apparent reason, crashed her bike about a mile north of the Chancey lock and wound up with five skull fractures. Help is a long way away when your partner is unconscious on the ground with head trauma.