I’ve been taking some grief from family and erstwhile friends about all the stuff I had on my old bike and what I plan to transition to the new Surly Long Haul Trucker.

My buddy and former coworker Chuck Keefer left this snide comment under Monday’s post, “I was just wondering if you plan to transfer EVERYTHING from your old bike to the new one or if you might just settle on the few hundred of them that you actually need.” 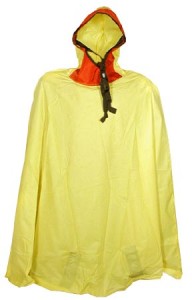 It’s true that Chuck doesn’t carry a lot of stuff on his bike. He just buys one of every kind that comes along. In a classic case of understatement, his web site says, “He also has this thing for two-wheeled vehicles – he owns six bicycles and three motorcycles.”

That got me thinking

There was a discussion about riding in the rain on a touring list several months ago. Riding in the rain in South Florida is usually no big deal. If it’s a hot day, the rain is refreshing. As long as there is no close lightning, I just splash on by. My new fenders will make it even better.

Two years ago, though, I was on a TOSRV group ride in South Georgia when the skies opened up for about 25 miles. It was a chilly day, so I put on my arm and leg warmers to act as sort of a wet suit and pulled on my Campmor Rain Cape. [Editor’s note 12/14/09: readers have reported a broken link. I called Campmor and they said they have not discontinued the product, it’s just out of stock. More are due in. You can all them at 1-(800) 525-4784 to see if they are available.]

The cape kept the top part of me dry, but allowed enough air to circulate underneath to keep me from sweating too much. It turned what could have been a miserable experience into a tolerable one.

If I had only had a Veltop 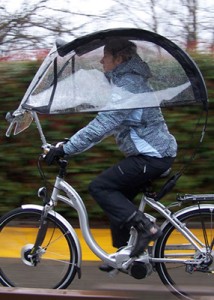 But rain capes are so “yesterday.” What I really need is a Veltop.

Look at it in action here.

This would be perfect for South Florida where we have frequent rain storms followed by blazing sun.

What about wind, though?

The Veltop folks have a quick answer: In case of front wind, the resistance is the same to that of a human body because of the presence of the windscreen which has an equivalent width and a convex shape as well as a variable gradient. At 20 km/h (12 miles/hour) there is no difference with a VELTOP. Up to 30 km/h (18 Miles/hour) the wind resistance remains inconsiderable. On urban rides such speed is rarely possible. Side winds meet no resistance when the side protections are rolled up, the hood itself has no negative influence on the rider’s stability. In case of rain or cold, a wind, which is blowing sideways, can be perceived by the rider if the side protections are pulled down but cannot be considered as dangerous. Nevertheless we recommend not to pull them down in strong wind or storm. In extreme bad weather conditions we recommend to ride without the hood.

There’s even one for a ‘bent

Chuck is going to be SOOOOO jealous when I show up with one of these on my new bike.

Oh, yeah, if you need help paying for it, they sell what they call a “Long Communication Support” – a transparent plastic film that would hold messages. You could become a traveling billboard with advertising on your back.