My kids have heard all the stories about how I delivered newspapers when I was 12-years-old. My route was uphill both ways, covered in ice and snow year-round except for those days when eggs were frying on the pavement. And, of course, I was tough enough that I could do it on a single-speed Schwinn without a seat.

I traded my Schwinn for a Surly

I’m not that tough these days.

I bought a Surly Long Haul Trucker just because it was designed for long distance comfort. I ride with a Brooks Champion Flyer leather saddle because the springs absorb the bumps and road buzz and the leather molds itself to me, not the other way around.

Lance Armstrong is know as Mr. Millimeter because he is very precise in the way his bike is set up. And, it’s true. Once you’ve been riding a lot, you can tell when something is out by a 16th of an inch.

The saddle is one of the three points you contact your bike (saddle, pedals and handlebars) and it’s the place where you can be comfortable OR in agony.

Most seat tubes (the stem-like thing that the seat attaches to) have only one bolt to control all those adjustments. The up and down piece usually has notches in it. If your preferred angle hits one of those notches, you’re good; if not, you aren’t quite as comfortable as you could be.

Brooks saddles with springs, like mine, are usually ridden slightly nose-high. Mine was close to right using the seat post that came with my LHT, but I read a lot of discussions on the phred list and the Surly group recommending posts that have two bolts and no notches to allow more precise adjustments and that have more “setback.”

These polished two bolt seat posts have a generous 30.2mm of setback, among the longest ever. This is very important for those who ride Brooks saddles which have very little fore-and-aft adjustment due to the short rails.

The VO posts are internally ovalized to reduce weight to 254gms. The adjustment is from the bottom and the two bolt design makes it easy to precisely adjust the seat angle. Also note that the head is integral with the post, not pressed on as on many modern posts. This makes them stronger and lighter. The quality and finish is second to none.

Grand Cru sure is pretty 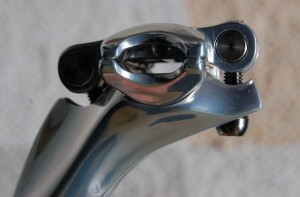 You can see how the two bolts will allow much better precision.

Crank down on the back one to raise the nose; tighten the front one to lower it. Because there are no notches, there are no limits an infinite number of fine adjustments. 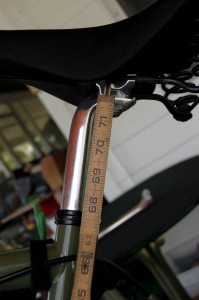 The first step in the transition was to not mess up the careful fit I had gotten when I bought the bike.

I wanted to duplicate as closely as possible the old seat height and setback. I would eyeball the tilt and adjust it to feeling.

The actual measurements weren’t important. I was just going for the relative adjustments. I used an old-fashioned wooden folding ruler to nail the distances.

My first pass was pretty close

When I took it out for a spin, I needed to raise the seat by about an eighth of an inch. The fore-aft was OK and the tilt was good right away.

I’m happy with the product and the result. 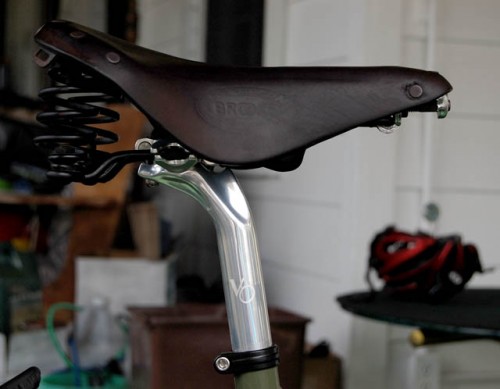