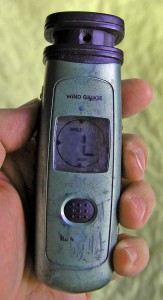 Wind is a really big deal when riding the LOST, which is about 30 feet above the surrounding terrain with no place to hide, so I jumped on the chance to buy a portable wind gauge when I saw them on sale at Radio Shack.

It’s not listed on the current web site, but Amazon has one that’s even cooler (at about twice the money). This is their flavor: La Crosse Technology EA-3010U Handheld Anemometer

How big a deal is wind?

Bro Mark sent me a link to a great calculator that translates bike speed, weight, grade and wind speed into watts.

The site points out on a flat road, aerodynamic drag is by far the greatest barrier to a cyclist’s speed, accounting for 70 to 90 percent of the resistance felt when pedaling. The only greater obstacle is climbing up a hill: the effort needed to pedal a bike uphill against the force of gravity far outweighs the effect of wind resistance.

What boggles my mind is not so much the effect that even a minor headwind has (13 mph with a 6 mph headwind requires 80.6 watts of power), but the effect of a tailwind of the same speed. 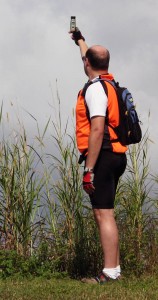 It only takes 4.03 watts to maintain13 mph with a 6 mph tailwind. That’s why even a tailwind that barely causes the grass to move makes you feel like Superman/woman.

(6 mph is a significant number for me because that’s the lowest value that my handy-dandy Radio Shack wind gauge will record.)

I’ve had some good days when 2.5 watts of output would rocket me along at 18 mph with a 12 mph tailwind. Unfortunately, a lot of those days would have taken 317 watts on the return against the wind. I guess that’s why I probably only did 11 mph on the way back (143 watts).

Pacelines are about more than wind avoidance

Drafting is an important technique in road racing. Exploratorium Senior Scientist Paul Doherty explained, “The bicyclist, as he moves through the air, produces a turbulent wake behind himself. It makes vortices. The vortices actually make a low pressure area behind the bicyclist and an area of wind that moves along with the bicyclist. If you’re a following a bicyclist and can move into the wind behind the front bicyclist, you can gain an advantage. The low pressure moves you forward and the eddies push you forward.” 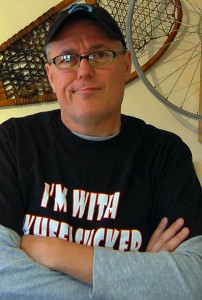 I always thought that the advantage to riding in a paceline was that the following riders (wheel suckers) were getting a wind break. It turns out that there is an advantage for the puller, too.

Suprisingly drafting not only helps the bicyclist following the leader, but the lead cyclist gains an advantage as well. Paul explained, “The interesting thing is by filling in her eddy you improve the front person’s performance as well. So two people who are drafting can put out less energy than two individuals (who are not drafting) would covering the same distance in the same time.”

4 Replies to “Wind is a Real Drag”