I’ve tried several different ways of mounting my camera to my handlebars depending on what camera I was using and what materials were at hand. I finally settled on a RAM mount for my cameras.

Bro Mark, who is a weight wienie, usually carries a tiny camera (now probably replaced by his trendy iPhone).

He created a camera mount out of the top of a plastic soda bottle using the bottle and cap, a stainless steel hose clamp similar to this (size will depend on your handlebar), a piece of inner tube and a 1/4 x 20 bolt. You can find all of it at your local hardware store or in the bowels of your junk drawer. 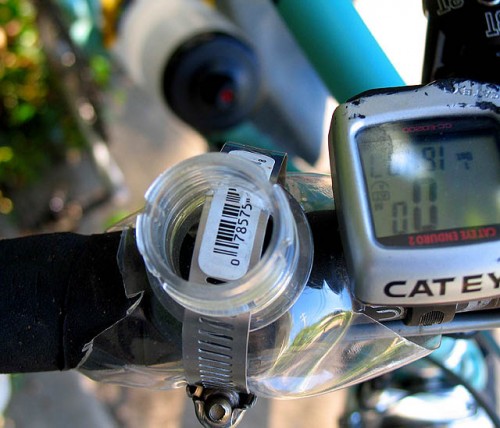 Trim to bottle to size

Step One is to trim the top off the bottle. You can do this with a knife or a pair of scissors. With a little pruning, you can leave enough of the bottle to protect your bars. (He said he left strips about three inches long for the wrap-around)

Cut slots for the hose clamp

Step Two is to cut slots into the bottom of the bottle top to hold the hose clamp. I was going to ask Bro Mark how he did it, but he’s tied up on an advertising shoot in Memphis. That means I’m going to wing it and let him make any corrections in the comments section. 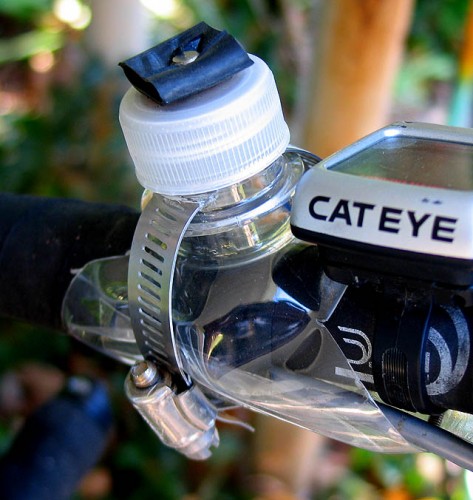 I’m going to guess that the easiest way to do it would be with a Dremel Tool if you have one. Since I don’t, I’d be inclined to tackle it with a hacksaw. It’s not rocket science, so anything that will cut two slots and leave you with most of your fingers will work.

[Bro Mark surfaced long enough to say that he thinks he cut the slots with an exacto knife. That might explain what looks to be a scar on the finger on the left.] 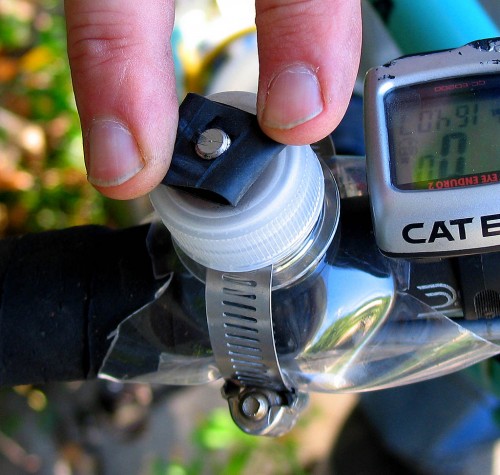 Step Three is to install the bolt to hold the camera.

Camera tripod screws are a standard 1.4″ x 20 thread available at any hardware store.

This is a case where bigger ISN’T better. Get a bolt that’s just long enough to go through the bottle cap and any cushioning material (washer, inner tube) and just far enough into the camera tripod socket to be secure. Mark said he added a lock washer on the bottom and top of the bottle cap (below the inner tube).

Use it as a camera mount OFF the bike, too

Make up a second bottle top for use off the bike. When you want to stabilize your camera, fill a soda bottle with water, sand or something heavy, put on the top with the tripod screw and you have a ready-to-use camera support.

3 Replies to “Camera Mount Out of a Soft Drink Bottle”