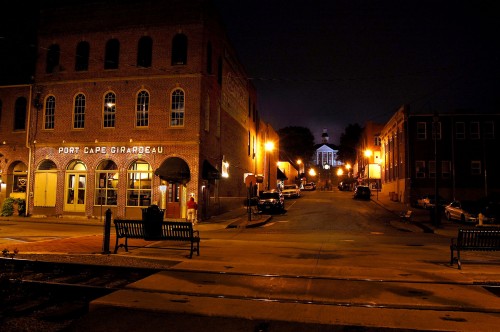 I shot this photo looking up Themis St. in Cape Girardeau when I was home in October 2009. The historic Common Pleas Courthouse is at the end of the street.

This trip I thought I’ d take the picture from the opposite direction, looking down Themis St. toward the Mississippi River and the Old Town Cape area. 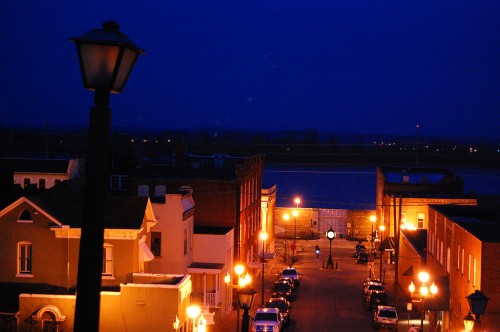 While I was shooting a series of other photos, I noticed a flashing bicycle light at least three blocks away. It turned out to be two cyclists coming up the street.

While I was putzing around trying to get this shot composed, a young woman materialized from the shadows. We exchanged some pleasantries and she disappeared. An elderly gentleman sitting on a park bench nearby and he said, “Do you reckon we scared her off?” 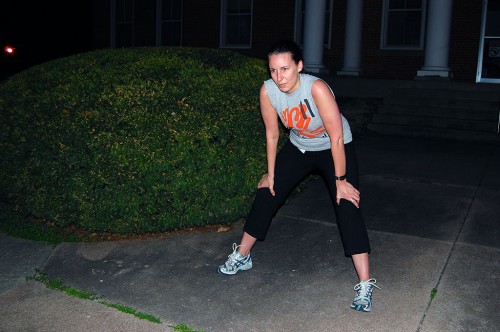 About five minutes later, she showed up again.

“Did you just run up those courthouse stairs? Twice? On purpose?”

“Yes. It was three times.Yes. I’m training for a triathlon in Florida in April.”

When she disappeared down the hill again, the man on the park bench said, “Tell her there are 55 steps, not counting the landings.”

When she got back to the top, she was barely breathing hard and her heart rate was in the low 170s (resting is usually 52 BPM, she said.) A stint of working in a downtown restaurant where she had to hump meals up three floors prepared her for running up and down the courthouse steps, she said. 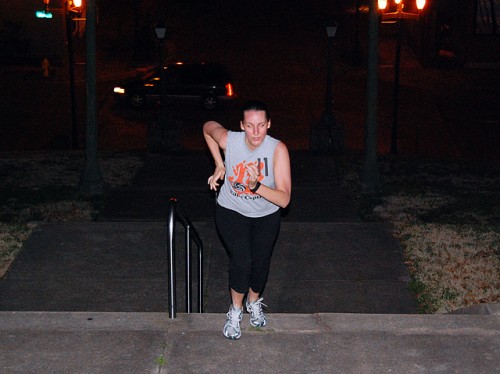 Shana, who grew up in Perryville, graduated from Southeast Missouri State University and has worked at a variety of local restaurants. She’s at Imo’s Pizza now, a place she rates highly for its employee-friendly management and good food.

Right now, she’s working to get debt-free and to sell her car to cut expenses. Cape is small enough that she feels like she can get around on foot or or her bike. Her boyfriend lives in a house with three other guys. The four of them make do with one car for those times when they go a long distance or need to carry something bulky.

When she finished her fifth climb up the hill, she said she was going to call it a night. All of the talk about food and restaurants had made her hungry.

Despite all the yammering by yahoos in the letters to the editor, Cape is a reasonably bicycle-friendly community.  Now that the weather’s turning nice in the Midwest, I’ve been pleasantly surprised to see a lot of bikes on the road. A lot of them are on the Cape LaCroix Recreational Trail, but a lot of them are utility riders going from place to place.

Velo Girardeau Bicycle Club is an active, friendly group with a wide range of rides. I ripped off their Tour de Cape logo (with artist Don Greenwood’s permission) for my business cards and branding.