This is going to be a busy weekend. The annual Frank Stark Ride will be held in Boca Sunday, July 18, starting at 7 A.M.

The Boca Raton Bicycle Club folks want me to emphasize that the rider who was involved in the crash at the end of the video was NOT part of the Frank Stark Ride.

My feeling is that he wasn’t part of the ride, but he was in the midst of riders who WERE and it was the luck of the draw that an elderly rider turned in front of him instead of someone else. Just because you are part of an organized ride doesn’t mean that bad things can’t happen. Y’all be careful out there.

You KNOW you’re in Boca when they offer iced towels 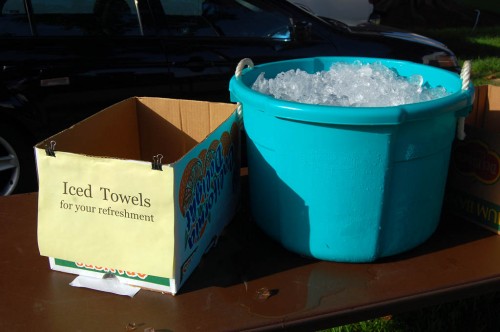 The South Florida Bike Expo will be held in Ft. Lauderdale’s War Memorial Auditorium Saturday July 17 from 9 A.M. to 7 P.M. and Sunday from 9 A.M. to 6 P.M. Admission is free.

The event is billed as the largest expo and sale of bicycles and bike accessories in South Florida’s history. We’re going to be there, so stop by and put a face to the name.