I’ve been on a bunch of group rides, including the Freakbike Militia’s Friday the 13 Ride in March, but the July 1 Summer of Love ride was the most fun I can ever recall.

The Summer of Love Ride – The 60’s without the teargas 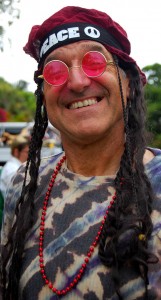 The bikes starting gathering near Southern and Flagler some time after 6 P.M. In a lot of cases, “some assembly is required.” That’s OK, though, because everyone wanted to see who had cooked up something new.

Kid Adam was saying he wished they had one of these rides every week, but one of the long-time FBMers (Freak Bike Militia) said that it takes at least three months to build some of the more exotic bikes. That’s why the next event will be around Halloween. 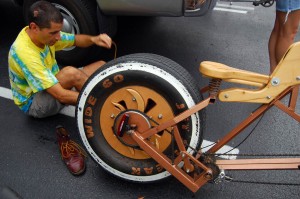 These aren’t wackos with guns waiting for Armageddon. These are wackos with regular jobs and families who like to ride bikes they build from scratch. Oh, yeah, and have a good time.

Some of them build high bikes that are tall enough that the rider could dunk a basketball without stretching much. Others are lowered until they almost drag the ground. 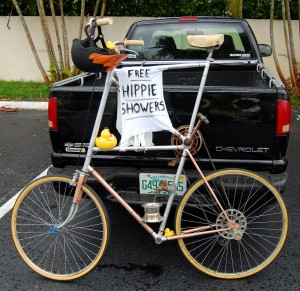 There was one that combined the high-rise effect with a pump that kept water running into a “hippie shower.”

I asked the rider what she’d do if she took a tumble and all the water spilled out.

“I’d have bigger things to worry about than spilled water,” she answered.

Theme was Peace and Love 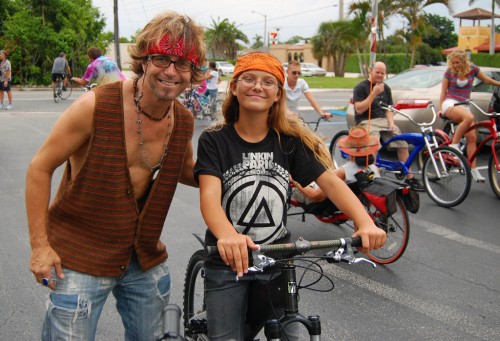 It’s a little disconcerting to see clothes that you used to wear considered costumes these days, but I guess that’s life. 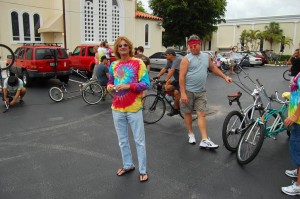 I’m ready to state without equivocation that I never wore any tie-dyed clothing. In case my memory has passed along WITH the 60s (both my age and the Decade), I’m sure Wife Lila will correct me. 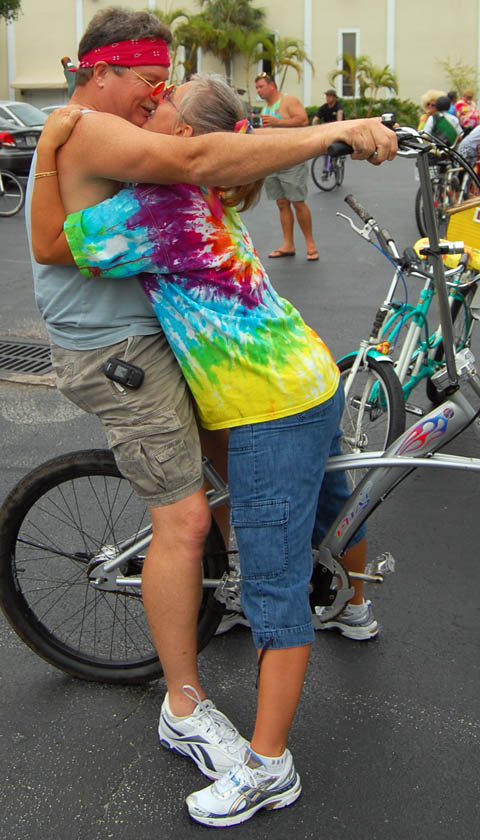 Here’s a couple who may not be old enough to remember the 60s, but they certainly managed to capture the spirit of those days.

Despite the appearances, this was NOT a bicycle built for two.

The Public Display of Affection broke up before the Hippie Showermobile was wheeled over to cool them off.

Tandems and Trail a Bikes

Little Dillon Shreve was all helmeted up and ready to pedal.

There were several youngers on tandems and Trail a Bikes.

Raffle tickets were given out to every rider who was wearing a helmet to promote safety.

The best part of the ride was not just the camaraderie of the group, it was the good vibes that radiated  from it.

This was a ride that brought smiles to the faces of everyone it passed. Joggers, fishermen, dog walkers, everybody gave a smile and a wave.

Critical Mass without the attitude 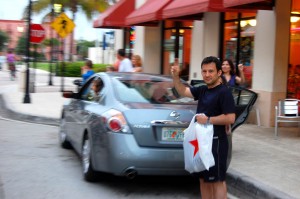 Some riders would go ahead and block intersections so the group wouldn’t get split up by red lights. Instead of honking impatiently, drivers would pull out their cellphone cameras and take pictures.

Maybe it’s just hard to get PO’ed at a bunch of folks wearing funny clothes riding on funky bicycles.

I don’t want to step on any toes here, but everything I’ve read about Critical Mass rides has led me to believe that they send a message of us vs. them and projects a chip-on-the-shoulder attitude.

This ride, though, had to make people think, “Wow, I wish I was out there. That looks like a blast.” 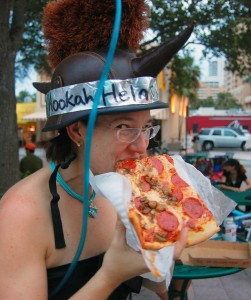 When I left the house, there was an 80% chance of rain with dark clouds all around.

Except for a few sprinkles, we made it all the way downtown, through CityPlace and to the Fountain in front of where the old library was without getting rain.

There was just enough time to chow down on some biker food, play a few games, make a few announcements and then the Monsoon God visited. Not only did the skies open up, but the winds whipped the rain around like a mini-hurricane.

Everybody headed for cover for about 15 minutes, then what was left of the roughly 115 participants left in a light rain for the starting point.

It’s times like these that make me glad I always pack rain gear. I actually enjoyed the ride back in the sprinkles.

A small nit to pick

If I had to say there was anything that bothered me, it was the number of riders who didn’t have headlights and taillights. Maybe they didn’t think they needed them when they were in the middle of a large group of riders who DID have them, but the rain fragmented the riders enough that there were some awfully dark bikers on the road.

I would have hated to hear about one of the riders who had been having such a good time earlier getting hit by a motorist who couldn’t see him through the combination of a foggy window, rain and dark. It was particularly dangerous because the motorist could have been concentrating on the bikes WITH lights and not notice an unlighted bike until it was too late.

Freakbikers put the fun back in biking

First-time riders Kid Adam and George Primm said they’d be back. I sure wouldn’t miss it. Freaks put the fun back in biking.

5 Replies to “Freakbike Summer of Love – Best Ride Ever”