I bought a Garmin nüvi 760 GPS about two years ago. You can read my Turbulencetraining.com – 75% Commission & New Monthly Continuitynk to review of Garmin Nuvi 760 GPS” href=”http://www.palmbeachbiketours.com/garmin-nuvi-760-gps/” target=”_blank”>”first impressions” review here. Not long after, I signed up for a Garmin nüMaps Lifetime North America Map Updates subscription. You can read about the installation process here.

Several months ago, I noticed that the battery life was getting a little short when it wasn’t being powered by the automobile. That’s not a big deal. About the only time I have it unplugged is it I hand it to a passenger to search for something. Still, I figured I’d replace the battery if it was cheap and easy.

BINGO. I ordered from the fine folks at BatteryShip.com. The battery was $19.95 with free shipping and a set of tools. I could have gotten a similar deal through Amazon for about a buck cheaper, but I would have paid $4.99 shipping. 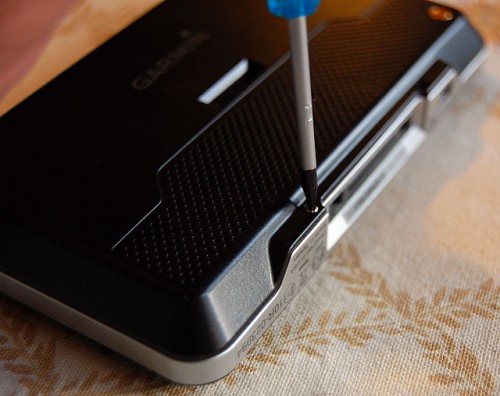 Remove the two screws holding the back on. This is where you’ll be glad you ordered from someone who sends tools along with the battery. Those teeny-tiny screws aren’t Phillips screws. They use the T-8 Torx driver that was in the tool kit. I don’t think I had anything that small on the workbench.

2. Pry off the back cover 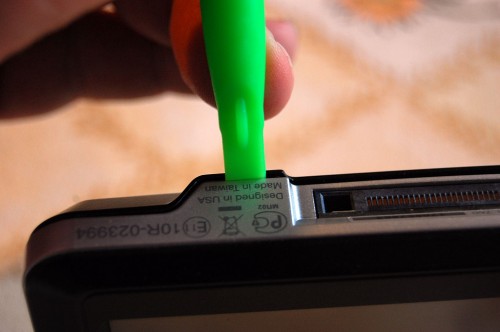 Use the handy-dandy thing that probably has a special name, but I don’t know it, to pry off the back cover. The plastic widget looks like a miniature version of a tire lever. The cover has a pretty snug fit, so the tool is helpful. Be firm, but gentle and it’ll finally come off. Be careful around the on-off power switch.

When the cover finally snaps off, don’t yank too hard. The speaker and battery are attached to the cover with some fairly short wires. 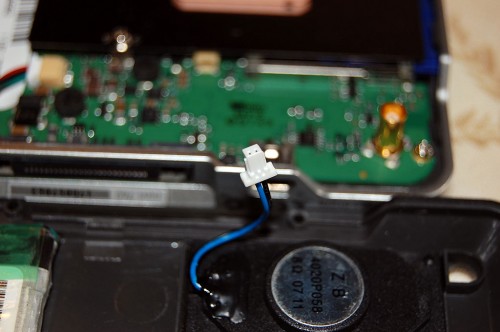 The speaker wires are fairly short, so I unplugged those before the battery. 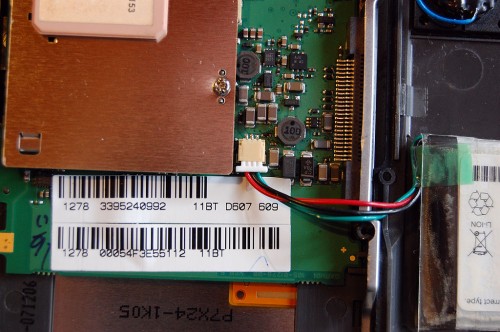 5. Pry the old battery off the back cover 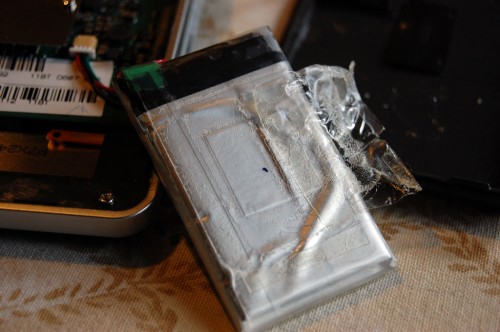 The old battery is stuck to the back of the cover with two-sided tape. I saved the tape to put on the back of the new battery to keep it from moving around when I closed the case. When you’re sticking it down, the wires should be on the top, inside of the cover so they’ll reach the connection terminal.

6. Plug in the new battery 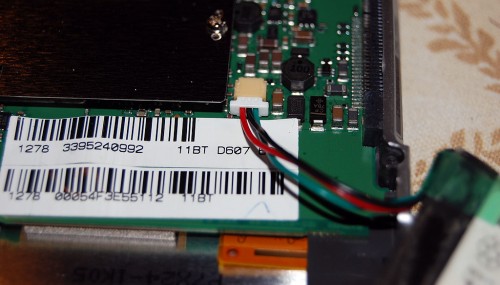 The connector is keyed, so you can’t put in the wrong way. (Unless you’re a big fan of brute force.)

7. Plug in the speaker wire connector 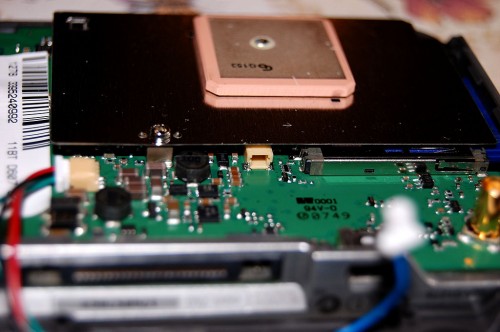 The terminal for the speaker is the ivory-colored rectangular device in the middle of the frame. It’s keyed, too. I think the blue wire goes on the left, but I can’t swear to that. It’s a tiny connector on a short wire. If you have fat fingers, a pair of tweezers might be handy.

8. Pop the cover back on

Make sure you don’t have any wires trapped, pop the cover on, then replace the two screws. Life should be good.

After snapping the back cover on, but before putting the screws in, I decided to do turn on the power switch to make sure everything was working. The switch is a spring-loaded momentary contact switch that has some resistance to it.

This time, however, it moved freely back and forth without doing anything. It’s amazing how long you’ll try something with absolutely no hope of a changed result. I didn’t see where I had been doing anything anywhere close to where the switch lived, and I hadn’t seen any kind of cautions in anything I had read.

Sounds like a known problem with Garmin power switches

I did find some reports of other folks who had their switches fail.

The semi-good news – particularly since I’m leaving to go on a two-week road trip – is that the unit will still work when it’s plugged into the car and computer. I just can’t turn it on and off manually from the switch. That’s not a big deal. The unit will power down on its own 30 seconds after it’s unplugged (or I can press the display to tell it to stay on).

The only time I could see it being an issue is if the GPS has to be reset. If that happens, I guess I’d have to pull the back and unplug the battery.

When I get back, I’ll decide if I want to get it fixed.