You’ve heard me say / complain that South Florida is flat. 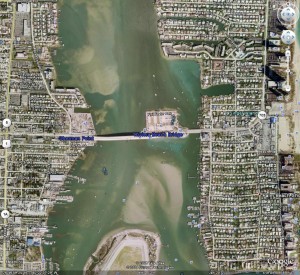 How flat is it?

So flat that triathletes and other folks wanting any kind of climbing experience have to head to the Jerry Thomas Memorial Bridge, better known locally as the Blue Heron Bridge, which links Riviera Beach on the mainland to Singer Island on the ocean.

I’m proud to say I got the sign changed

The first time I rode over the bridge, that bicycle sign on the right of Son Adam said, “Walk Bicycles Across Span.”

I made some calls to the Florida DOT, who looked at the bridge and agreed that it made no sense. I was pleasantly surprised to see how receptive they were to input.

That bridge HAS to be safe, right?

Here’s her story: I was shot on the Blue Heron Bridge early the morning of July 27, 1999 while training for a triathlon. I was running (slowly). The bullet, a .22 short, lodged about a half-inch from my femur. I went to four doctors, asking for it to be removed. All said leave it there; it’ll do less damage than disrupting the muscle tissue to remove it. From the start, it’s been much more of a psychological pain than a physical one. But I completed the triathlon (Siesta Key about three weeks later). Then I moved to Seattle, where there’s nothing but hills — and some of the best biking paths in the country.

New Year’s Day, 2000, was beautiful day, so Anna Redgate packed 2-1/2-year-old Whittaker and nine-month-old Grace in a red Baby Jogger and started walking the bridge. When they got to a traffic light, they stopped, waved to drivers at the light and started to cross when the light was in their favor.

Suddenly a car blew through the light, stuck the stroller and crunched it against the bridge railing.

I’ve seen a lot of bad things in chasing sirens most of my life, but I can’t imagine anything as horrific as Anna Redgate’s account. “I felt my body lunge forward into a sprint. Desperate to get out of the way, I pushed the children as fast as I could go. In that final moment, I felt the car come up off the road and along the left side of my body. The stroller was ripped from my desperate clutches and then everything stopped. Before me, facing me, were Grace and Whitaker.

“The jogger/stroller showed signs of the impact. Whitaker, who had been on the side of the traffic, was now pushed up against the bridge staring at me, stunned. Little Gracie was lying on his lap but somehow her feet were still facing me. I immediately reached down, unbuckling her, and scooped her up into my arms. When I held her, all I could see was her perfect face but I could feel something no human should. My right hand was inside of her. Her little torso had been torn nearly in half by the impact.”

The driver, 65, had been on a two-day drinking binge; his blood-alcohol content was three times the legal limit. He was sentenced to 10 years in prison for DUI manslaughter, but died one week after being imprisoned.

Linda Taylor and Cynthia Andrews had a weekend routine where they would get up before the sun did and do a brisk walk back and forth over the bridge.

Around 6 in the morning on Sept. 24, 2006, a hit-and-run driver struck and killed Andrews, 49, and her friend Linda Taylor, 56. Andrews was hurled from the bridge and plunged to a small beach below. Her friend, Taylor, was left dying on the asphalt. A teal GMC Suburban with significant body damage and two flat tires was found a short distance away. Investigators said the vehicle had to travel roughly 15 feet from the roadway to hit the women.

The driver took a plea bargain that netted him five years in prison, 10 years of probation and a lifetime driving ban. You can read the whole story here.

After that crash, the concrete barrier above was constructed to give protection to peds and joggers on the sidewalk. Ironically, that took just that much buffer away from cyclists. 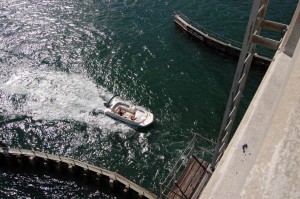 I remember that steel ladder well

We chased the car on foot as far as we could, radioed the office to call the cops, and went back to lunch.

Just as we were leaving, we got a radio call saying that some guy had called a clerk in the newsroom to say he was going to jump off the Blue Heron Bridge because he had tried to kill his wife.

When we got to the bridge, I talked a boater into giving me a ride where I could see the man perched outside the railing at the highest point. A policeman started waving his arms at me. I assumed he wanted me to back off, so I told the boater to back up. The cop started gesturing to come closer.

He wants to talk to the press, the cop yelled 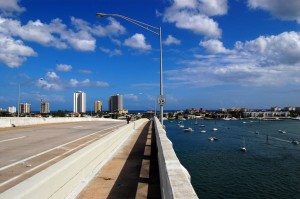 I wasn’t going to pass up an opportunity like that, so I had the boater pull directly under the span where I could climb a steel ladder going all the way up to the top. In those days, I don’t recall nice platforms along the way. I remember it as being a straight climb that went on forever.

Adrenalin takes you just so far

Remember, I said it was a hot day? I was carrying three camera bodies, a camera bag with more stuff and wearing a shooting vest filled with filters, light meter, spare film and no telling what else. About a third of the way up the ladder, I wondered how many more feet it would be before I cramped up and either froze to the rungs or got flipped free to sink like an expensive anchor.

When I finally reached the top, I couldn’t even make it all the way over the guard rail. I just stretched out on the top of it until I could get my breath. When I could finally move, I walked over to the would-be jumper, looked him in the eye and said, “Mister, if you had come up this bridge the way I came up this bridge, you wouldn’t even THINK about jumping.” 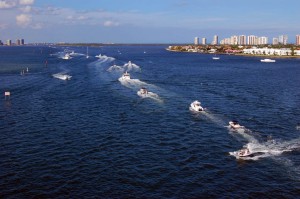 “I don’t think you’re with the press,” he growled.

“I could show you all kinds of credentials, but how about if I get the clerk you talked to when you called the paper on my two-way radio and she’ll vouch for me. But, here’s the deal. You have to promise to hand me the radio if you decide to jump, because I have to pay for it out of my own pocket if it goes missing.”

Eventually we managed to talk the guy into coming down off the bridge, and I got a very nice letter from the police department thanking me for my help. For some reason or another, though, they never asked me to teach negotiaing skills to the other officers. 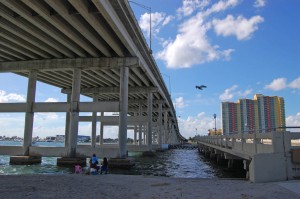 Under the east end of the bridge is Phil Foster Park, which has boat ramps, picnic areas and the remnants of the old bridge which have been converted to a fishing pier.

It’s a great place to enjoy the breeze and watch boats go by.

The brightly-colored multistory buildings on the right sit where the Crab Pot, a Palm Beach County institution, used to serve up inexpensive seafood.