You’re going to hear me talk a lot about stuff I discover when I’m scanning old film and prints. 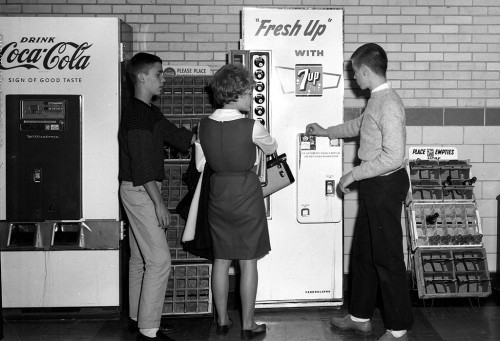 This picture of Cape Girardeau (MO) Central High School students lining up to buy soft drinks in the Tiger Den sometime around 1963 caught my eye because of the glass bottles and the soda cases to hold them.

I’ve been reading lately about the idea of imposing a tax on soft drinks to discourage consumption. (And raise money.)

How about this instead?

Bring back deposits on bottles and cans

Make it a buck a container.

Don’t think it’ll work? Look at the roadsides. You don’t see many aluminum cans in the gutters. They’re picked up by folks who are willing to bend over to recycle them.

On the other hand, I’m constantly dodging broken glass from beer bottles. If you had to pay a buck deposit, you’d either bring the bottle back or someone would be more than happy to pick it up later.

It’s a win-win. The governmental agencies wouldn’t have to spend money to clean up litter, valuable resources would be recycled and folks willing to do a little work would have extra income.

Southeast Missouri Fair was almost as big as Christmas

When I was a kid, the high points of the year were Christmas, the 4th of July, Halloween, your birthday and the week the Southeast Missouri State Fair came to town. 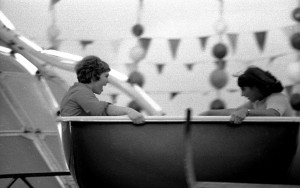 School would let out for half a day and we’d walk our legs off looking at livestock, checking out the cakes and pies entered in the cooking contests and load up on free handouts from every form of local business.

At night there would be stockcar races and a midway lit up with all kinds of lights. Music from rides would compete with barkers who were very good at separating you from your money.

Eventually, you’d run out of cash

At some point, the buck or so you had saved from your allowance would be gone, spent on fair food, rides or trying to win a hunting knife or a teddy bear. 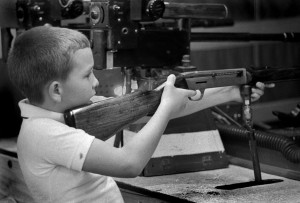 That’s when you and your buddies would go bottle prospecting. You’d crawl under bleachers, root thorough bushes and ask folks who were finishing up their drinks for their bottles – all for the 2-cent deposit.

Some of the more larcenous of the kids would lift up the edges of tents and snatch bottles that had already been returned. They grew up to be investment bankers or politicians.

No bottles left behind

When the fair finally pulled up stakes and headed to the next town, all that was left behind was a muddy field (it ALWAYS rained Fair Week), trampled sawdust and some blowing litter.

The one thing you’d NEVER find was a Coke bottle. They had all been Hoovered up by 10-year-old boys and turned in for two cents.