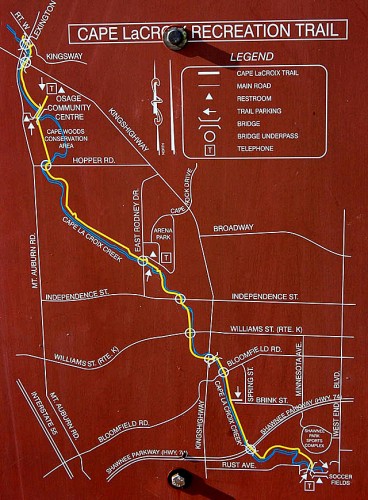 After a series of floods that sent water coursing through a local businesses, Cape Girardeau decided to tame the creeks that were causing all the trouble. One of the side benefits of that was the Cape LaCroix Recreational Trail, a 4.2-mile multi-purpose path created next to the creek.

I wrote back in 2008 how folks from out of town were coming to Cape to ride the trail and causing cash registers to ring. I speculated that it was the most-used non-spectator park in town. I’ve never been on it without meeting tens of bikers, roller bladers, joggers, walkers, families with stroller or people walking dogs. That might make it a little less desirable for hard-charging bike rider, but the town’s definitely getting its money’s worth out of the investment.

Thousands use it every nice weekend

A story in The Southeast Missourian announcing that the trail was going to be extended echoed that sentiment:

“Well used? That’s not even close,” said Davis, Cape Girardeau’s parks division manager. “You will see people on that trail every single day, whether it’s raining, snowing or whatever. In nice weather, there are thousands of people that use it on a weekend.”

[Editor’s note: The Missourian story spells the name as Cape La Croix (with a space); a sign posted at the Kingsway Drive trailhead has LaCroix as one word, the way I’ve always seen it., so I’m going to stay with that spelling.] 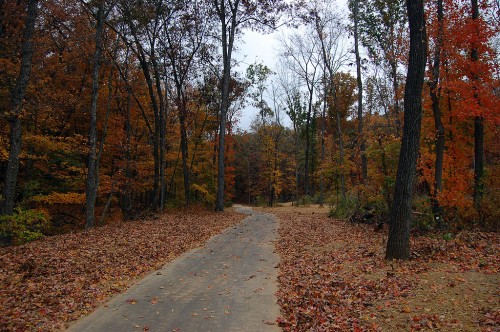 When I was in Cape this fall, I noticed new construction on the north end of the trail. I followed it and found it that about two miles of trail had been added north of the Kingsway Drive / Lexington Ave. trailhead. It took it all the way to the North County Park Conservation Center Nature Trail. There, unfortunately, was a sign banning dogs, bicycles and roller bladers on the unpaved walkway.

You can get a feel for what the path looks like on my CapeCentralHigh blog. 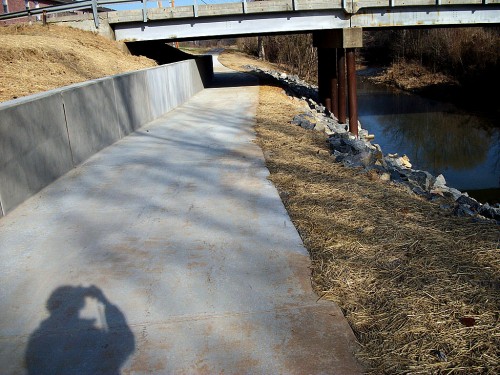 When I was there, one segment under a bridge needed to be paved. My mother shot this photo Dec. 12 showing the whole trail is now  passable.

The neat thing about this is that it ties in a whole new subdivision under construction. It’s not the mileage that’s so important, it’s the fact that it becomes a viable transportation link for a whole bunch of people who will now have an option other than blowing dead dinosaurs out their tailpipes.

New projects stress getting from A to B

I’m excited about the 2,100 feet of new trail that The Missourian mentions in the Dec. 28 story because it shows a shift in thinking from building “bike trails” for recreational uses to building alternative ways to move around the city. 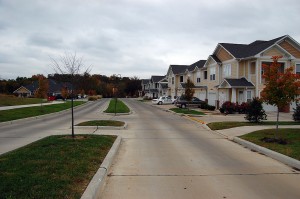 “The project would have two segments to improve the connections between the area along West End Boulevard near the Shawnee Sports Complex and the rest of the city, said Ken Eftink, assistant city manager and director of development services.

It’s not the length of the new trails that will matter, Eftink said, but where it will be located.

The main segment of new 8-foot-wide trail would run along West End Boulevard from Linden Street and extend south to snake through the soccer fields and connect with the pedestrian bridge where the trail currently ends, Eftink said. The second segment will be the connection from the trail to Shawnee Park ball fields near the Southeast Missouri Hospital pavilion, he said.

“The focus of the enhancement grant is really get people from point A to point B,” Eftink said. “Our overall goal is to provide a loop of the city. The trail opens up access to Arena Park, the Aquatics Center, Osage Centre and now up to North County Park,” Eftink said.

Cape has lots of hills 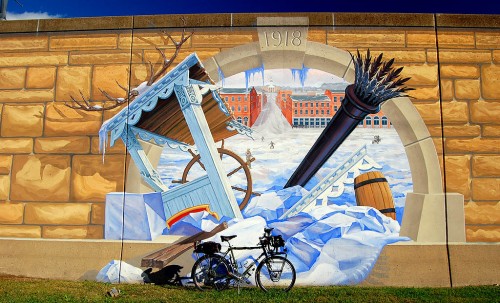 Cape has a rolling terrain with lots of short, steep hills. The bike trail makes it possible for me to go from my mother’s house on the northwest end of the city all the way to the south part of town without having to fight traffic nor constantly climb hills. I can pop out along the way to easily make it downtown for a ride along the Mississippi River or go down to see Civil War Fort D.

I ride the trail when I’m in town not so much for recreation as I do for a convenient way to move around. I’m glad the city is thinking in those terms. It’s a lot easier to justify a transportation link in these days of tight budgets than a recreational trail.