The first lesson I learned way back in the days of computer bulletin boards, way before anyone thought of the Internet, was Don’t Feed the Trolls.

Trolls are folks who post inflammatory or extraneous topics with the intention of provoking outrage and / or disrupting normal orderly discussions. Drop a helmet comment in just about any bike group, and you’ll soon have the group snapping at each other like a school of sharks going after chum thrown from a fishing boat, for example.

Bike groups have been gnashing their collective teeth at a new hate group Facebook fan page with the name, “There’s a perfectly good path right next to the road you stupid cyclist.” The page leads off with a picture of a cyclist being doored and a warning “My car is hard and I’m not slowing down.” 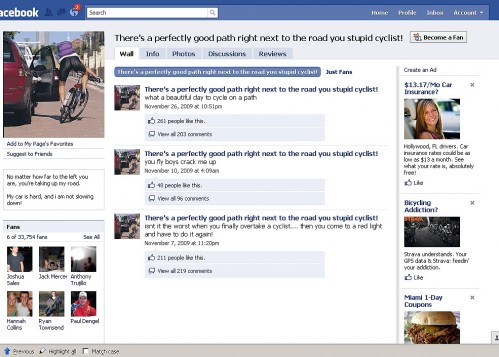 I did a pretty good job of ignoring it

I’ve just about given up on reading comments to news media stories involving bicycles. They quickly devolve into shouting matches between jerks on two wheels and jerks on four wheels and accomplish nothing. Media outlets, that used to require signed letters to the editor with IDs that were verified before printin, now care more about hits and traffic count than reasoned dialog, so they rarely step in.

Here an example from Iowa and North Carolina.

The road rage page is every bit as bad as described

Yep, it was as odious as everyone said. Some cyclists joined to provide a counterpoint, but they only raised the volume. Another group set up fan page to petition that the first one be shut down.

Many of us asked Facebook to remove the page for for violating the terms of service, specifically:

Someone on one of the bike forums had a good suggestion: if Facebook won’t take the page down because of user protests, maybe they’d listen to the advertisers who show up in the sidebar of the page.

It’s not a really practical idea because the ads rotate, so it’s not like an advertiser KNOWS where his or her ad is going to show up, but I tried an experiment.

See the car ad at the top right of the screen shot?

I sent the following email:

Facebook has a Fan Group that encourages violence to bicyclists. I noticed that your ad was displayed on it.

I encourage you to visit the page, read some of the comments, including the originator’s, “My car is hard, and I’m not slowing down!” accompanied by a photo of a cyclist being doored, and see if you think you want your company’s name associated with such content.

As an advertiser, you might have more influence than the cycling community in getting the page taken down.

After all, you are an auto insurance company. Wonder what the payout would be if one of your customers was a commenter on this site and ran over a cyclist?

[Note: the link I had to the photo and comments has expired or it has been removed. The comments were more disturbing than the picture, if you can believe that. The photo is small because of offensive language.]

I’ll let you know if I hear anything from them.

A Phred posted this update to the group:

It should be noted that while the group itself has not been removed, all the vicious postings by individuals that break the FB rules, have indeed disappeared. The group has now been overrun by cyclists and those who  stand by us. It has been reduced to mostly civil discussions, albeit, still  with some of the silly cursing and name calling, but just about all of the threatening content has been removed.

The name of the group is not in violation of FB rules, but some of the content is (was). That is why the group was not shut  down, and that is  why we must target specific posts in our reports to FB. What needs to be worked on now are the few  photos posted to the group that depict violence  toward bicyclists. We’ve almost got it licked!