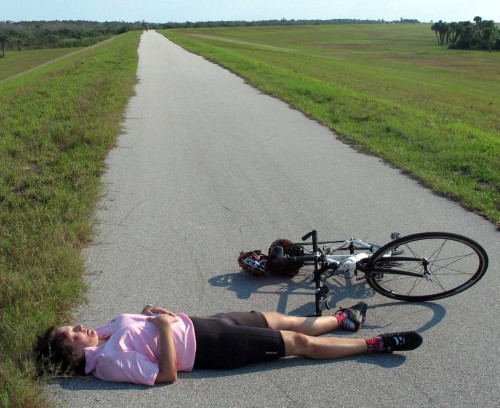 Three years ago, my friend, co-worker and riding partner crashed on the Lake Okeechobee Scenic Trail.

Her skull was fractured in five places, she had double vision, vertigo and short-term memory loss, plus the normal road rash. To keep from rehashing the details of the crash, go to my July 9, 2008 post.

Some cycling forums and lists ban the mention of helmets because the topic invariably creates more heat than light. Be warned that the H-word does come up in the video and in the original story, but helmets aren’t the focus of either piece. For the record, neither Mary nor I were wearing magic foam hats the day of her crash (mine, in fact, is visible in the photo, strapped to the back of her bike). 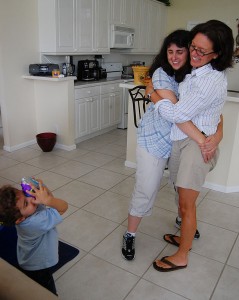 Mary’s friends (both real and virtual) and former coworkers ask me from time to time, “How’s Mary doing?”

I have to confess that we’ve had less and less contact over the months, especially since she and her significant other, Tammy, moved a county away with 2-1/2-year-old Nicholas.

I used the anniversary month of the crash as an excuse to visit them in their new home in Palm City.

I’ve never been much partial to kids, but Nicholas immediately won me over. He’s bright, inquisitive and has the most beautiful eyes imaginable. After watching me take pictures, he ran to get his Viewfinder to “take pictures” of his two moms. 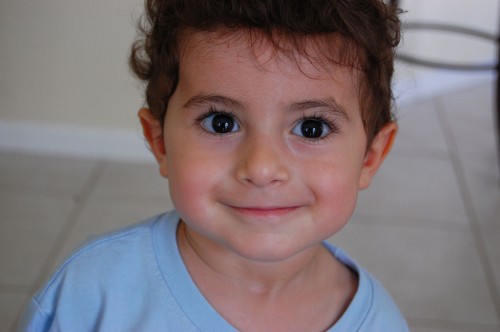 Mary seemed as happy and content as I’ve ever seen her.

She’s fit and tanned. She still has a few road rash “badges of honor” barely showing on her knees, but there’s no visible signs of her head injuries.

She loves her new life as a stay-at-home mom caring for Nicholas while Tammy is out working as a police officer at FAU.

Their new home is perfect for raising a family. It has plenty of room for Thomas the Train toys and all of the other stuff that a growing boy accumulates. There’s a sizable backyard and kids nearby.

Three years after the crash, she’s still unable to work because of the problems with double vision and vertigo. Special glasses with prisms help with the vision problem, but the solution isn’t perfect. She copes with the memory loss by sticking reminder notes on the refrigerator.

She’s been told that surgery could end up making her vision worse instead of better, so she’s not going to take the risk at this point.

She hasn’t been back on a bike. She says she goes out to the garage and looks at it from time to time and she enjoys looking at the Adventure Cycling Association magazine, but she can’t bring herself to climb back on two wheels.

Part of it is the vertigo that would cause balance problems, but she told me for the first time this visit that she thinks she’s afraid to get back on the bike.

Overall, though, she’s glad to be alive

Here’s a video where she tells the story about how her whole life changed in milliseconds.

17 Replies to “Mary’s Life 3 Years After Her Crash”