After much nagging and cajoling by Bro Mark, I bought a 40 GB iPod Classic MP3 player back in 2004. It cost $483, including shipping. 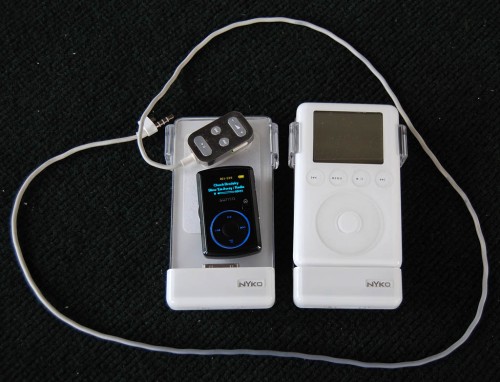 Almost immediately, I discovered that the battery wouldn’t carry it through a long ride, particularly if I hadn’t charged it completely from the ride the day before. Bro Mark turned me on to woot.com, which had special twofer deal going on a Nyko iBoost Battery Pack for iPod for about $20.

These puppies added some size and weight to the Classic, but they also meant that I rarely ever ran out of juice. And, if I did, I could pop on the backup battery pack and be back in business.

iPod remotes were getting hard to find

I rode with the Classic in the MP3 player pocket on the back of my CamelBak MULE, with the remote cord plugging into my Active Tunes iRide Pro speaker. The only problem was that the remotes were getting hard to come by and my last one was starting to sound like it might have a short.

A couple of years ago, Woot ran a special for the SanDisk Sansa e250 for about $20. I bought one for Son Matt and he loved it. It was small, the battery life was excellent and, with an external speaker, it was great on the bike and in the shower. He’s a big fan of podcasts and it did a good job on those. It also had an FM radio built in.

He was whining the other day about one of the speaker channels dropping out, so I started looking for a replacement for his Birthday Season. CompUsa had a refurb 2 GB SanDisk Sansa Clip for about $30 that was comparable to what he had, so I snagged it.

The more I looked at his, the more I was intrigued. The whole shebang is barely bigger than the remote control on my iPod. Sure, it doesn’t hold 40 gigs, but I don’t really need to be able to play a month of music without repeats.

I make do with about four playlists and that’s it. (I also keep an audiobook handy for the trips to the dentist. An audiobook and nitrous oxide makes the hour go fast. I’ve devoted one mystery audiobook to the dentist and I’ve been listening to it for two years. I may NEVER get to the end of it.)

I decided I wanted the 4GB SanDisk Sansa Flip

CompUsa had them online, but not at the local store. BestBuy had a new, not refurbished, Clip in stock for not much more than I would have paid for a refurb plus shipping. Better yet, it came with a 12-month warranty. That pushed me over the edge. I got it for about $60. WAYYYY better than $483.

What I like about the 4GB SanDisk Sansa Flip

Past reviews of MP3 speakers

I’ll post a follow-up review after I get a few more miles on it.