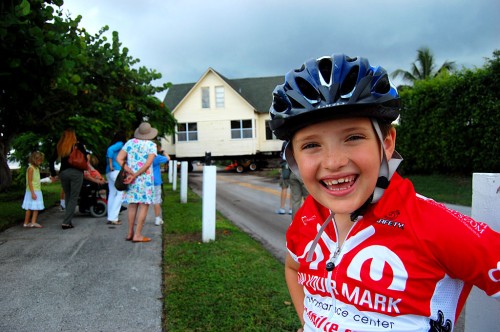 When seven-year-old Grandson Malcolm went on his first ride on the Palm Beach Lake Trail, he never dreamed he’d get to see a house being moved.

Video of the ride and house move

The first part of the video shows the start of the ride; the second part is the move of the Stambaugh Cottage.

This is the first time I’ve ridden with Malcolm in six or so months. He pedals to school every day, so he’s probably got more miles under his seat than I do for the year. Today’s ride – about 12 miles – was one of his longest, Dad Matt said.

I was really impressed with the way the kid could maintain speed and hold a straight line. When we had to get off the trail and onto city streets from time to time, I didn’t feel any qualms about his ability to ride in light traffic. 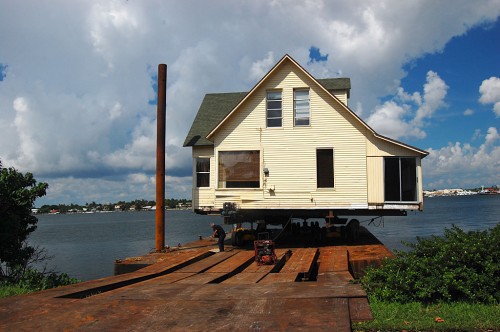 When we were several miles into the ride, a fellow on the trail warned us that it was closed ahead. That’s when I remembered hearing that a landmark Palm Beach building was being moved.

The Stambaugh Cottage, built sometime around 1910, had been used as a golf course caretaker’s home for decades. It had originally been occupied by Orrel Stambaugh, who helped build many of the area’s roads. A story in The Palm Beach Post said that the golf course had planned to tear down the building to put up a new groundskeeper’s house in its spot. Some of Orrel’s descendants put up money to move the house and the golf course donated the building and the money they would have used for demolition to the cause.

As of now, the cottage is sitting on a barge while a final destination is worked out. It took a little over two hours for the house to be moved to the barge after all the initial prep word was done.

Thanks to Matt for shooting the stills while I concentrated on the videos. Click on any photo to make it larger, then click on the left or right side to mover through the gallery. 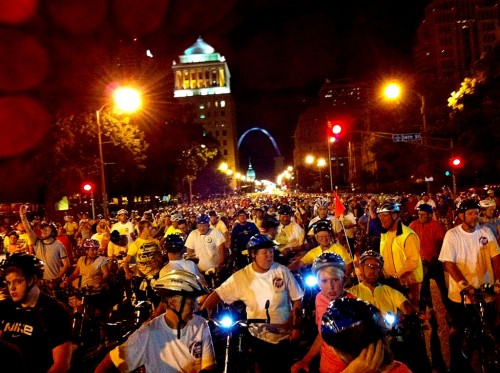 I was stuck in Cape Girardeau, Mo., waiting for a rebuilt transmission to be put in my van so I could return home to Florida. Brother Mark, who lives in St. Louis, encouraged me to come up for the 48th Annual Moonlight Ramble Saturday night / Sunday morning. It attracts 10,000 riders and kicks off somewhere around midnight.

I told him I didn’t have a big problem with midnight, but that I didn’t like the idea of being on streets clogged with a mix of riders.

He assured me that he had ridden the event several times and that starts are staggered, the streets are wide and the 13-mile route is long enough to let everybody have plenty of space.

Mother loaned me her Mazda 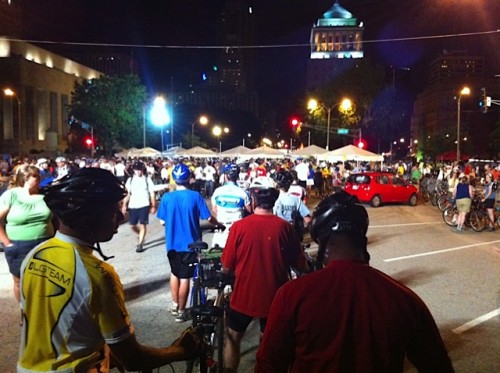 I didn’t bother to even try to see if my Surly Long Haul Trucker would fit in my mother’s four-door Mazda until Saturday mid-afternoon just before the two-hour drive to St. Louis. I figured that her two rear seats fold down, giving access to the trunk, so loading my bike would be a piece of cake.

Well, the seats DID fold down, but the access hole was way narrower than I thought. There was no way I was going to get the bike in THAT car without taking off more than I was willing to take off for a 13-mile gaggle.

Enterprise rental is just up the road 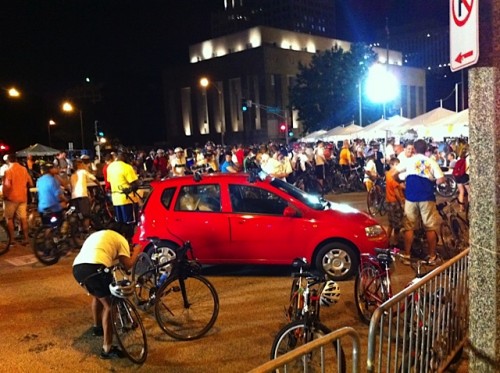 I’ll just rent a car. No big deal. Except that Enterprise closes at 1 p.m. on Saturday and it’s after 3. I put in a call to Wife Lila, who tells me that there’s a Hertz dealer just down the road.

They closed at noon. 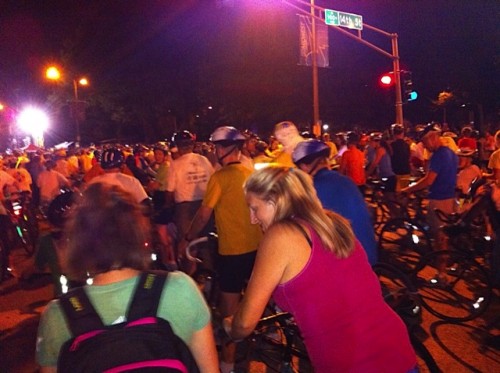 I have a Yakima Kingpin 5 on my van, but it’s stuck in the transmission shop. I don’t trust strap-on racks for good reason. Still, I pulled into Cape Bicycle, folks who wouldn’t steer me wrong. They HAD a rack that looked sturdy enough to hold my LHT, but it cost $149. Too much for one-time use. 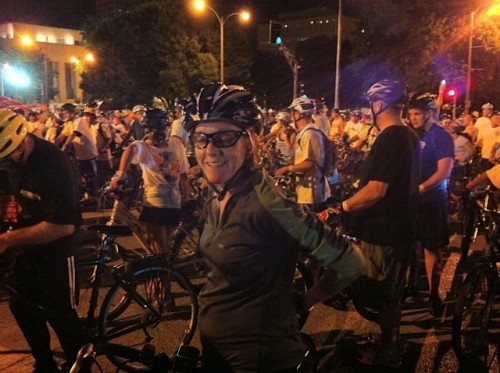 College is starting up. They didn’t have a piece of rolling stock to rent me, even if it hadn’t been too expensive. They sent me to Budget. They were closed, too.

At that point, I called Bro Mark and said I was bailing. “When you foul off that many pitches, the next one is either gonna be a strike or a beanball. Somebody’s telling me that I shouldn’t be doing this ride. Even if I could FIND transportation, I have this fear that there’s a tanker truck with my name on it somewhere between Fruitland and Old Appleton.” 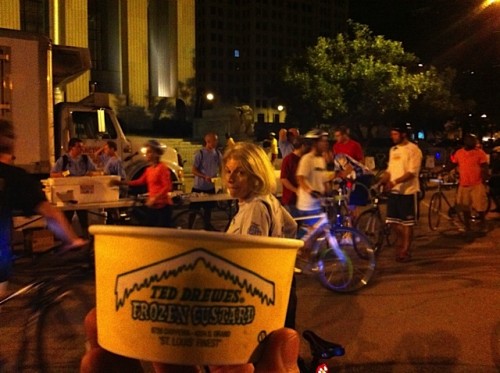 Mark said he’d document the ride with his iPhone, and that’s what he did. It appears that the Ted Drewes Frozen Custard at the end was the high point of the ride for him. (Either that or he was picking up some product placement payola that he didn’t share with me.)

Click on any image to make it larger, then click on the left or right side to mover through the gallery. 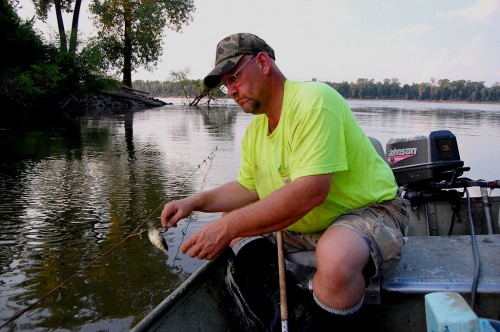 Whenever I go back home to Cape Girardeau, Mo., I take a ride down an abandoned stretch of U.S. 61 that has been bypassed by I-55. It deadends at a boat ramp on the Diversion Channel. That stretch of road has been underwater from the spring floods until just recently, so I was curious what it looked like now that the river has dropped.

Great day for a boat ride 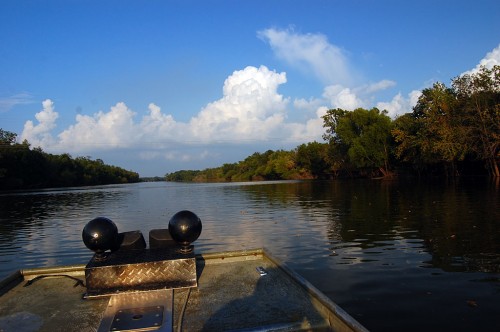 I ran into Ed and Melinda Roberts, who were cast netting for bait to use on their trotlines. After a brief conversation, they invited me to go with them down the Diversion Channel and into the Mississippi River where they planned to set up their lines.

Ed’s goal is to put 400 to 500 pounds of catfish in the freezer to tide them over the winter.

Here’s a video of Ed and Melinda setting out their trotline. You can read the whole story on my Cape Girardeau blog. 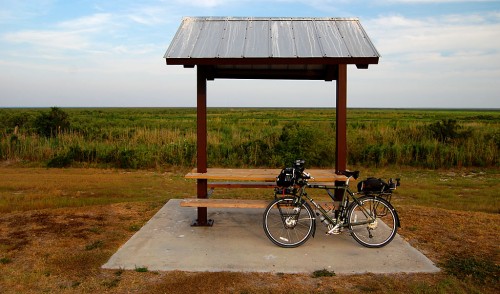 Anne and I headed up to the Lake Okeechobee Scenic Trail this weekend, not so much to ride the LOST as to go past the paved trail at the northwest corner and ride through the small neighborhoods in Buckhead Ridge.

Most of the residents are snowbirds from the Midwest who are like Jimmy John Shark who love fishing and rural life.

We only logged about 20 miles, but we saw an interesting mix of homes, waved at a bunch of people, snagged what I hoped was a wild orchid to replace one I found in Okeechobee years ago (it wasn’t) and let Texas Gal Anne moo at some cows.

There was a killer head wind on the way back, but that worked out fine. We were going slow enough that we spotted several gators, a bunch of great blue herons and other wading birds and scores of some kind of eggs along the trail. Someone had, obviously, been chowing down. I’ll have to ask Gary Ritter, who lives out there and rides almost every day, what they were. I’m thinking they might be turtle eggs dug up by raccoons.

My Surly Long Haul Trucker got tired fighting the wind, so I let it rest for a few minutes. 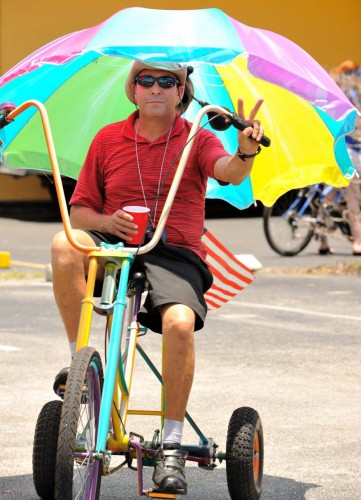 Folks keep asking me when this year’s Tour de Bar is going to be held. I don’t know. What I WILL do is pass on this message from a friend who is a member of the Hash House Harriers, described as “the drinking club with a running problem.”

I can’t tell you if the information is correct. You may get there any have to organize your own pub crawl on the fly. It’s not exactly my kind of bike ride, so you won’t see me there. Maybe somebody will provide pix like they have in the past.

and over to Singer Island with 400 other pub-cycling folks!!

Go SOUTH on US 1 and into the shopping plaza

on the WEST side of the road.

Park at the north 4 rows of the parking lot opposite the Brass Ring.

We will be raising money again to pay for Palm Beach Shores police,

and the remainder will go to the

Give a Life Foundation promoting organ and tissue donation awareness.

Thank-you again for your continued support of this charitable event.