I’ve been slacking lately. I caught a nasty cold on Thanksgiving Day and have been fighting it ever since. I was only on the bike one day since the middle of November. I don’t even want to tell you my mileage for the year. Let’s just say it’s the lowest since I started riding in 2001.

The one ride I DID haul myself out of my sickbed to do was the Freakbike Militia’s Choppernite 26.

I want to see faces, not biker butts 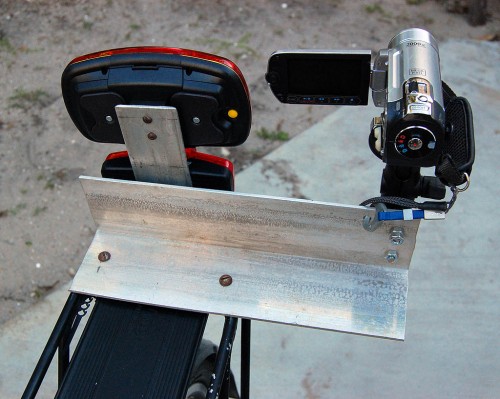 This time I wanted to shoot video of more than biker butts, so I rigged a mount that would let my Canon FS100 video camera point behind me. It’s pretty ugly and I won’t leave it on the bike all the time, but it seems secure. 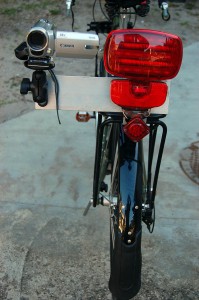 It’s made out of some 1/4″ aluminum stock I used to use for radio mounts. Two 1/4″ bolts through the aluminum and big washers underneath hold it to the Jandd Expedition rear rack.

I use a RAM mount with quick release to hold the video camera. Because I’m a belt-and-suspenders kind of guy, I drilled a hole in the mount for the lanyard attached to the camera. The RAM mount is solid enough to handle this bumpy ride, but it never hurts to be safe.

I wanted it mounted slightly ahead of the RealLite so it would be less likely to pick up flare from the flashing taillight. It needed to be off to the right enough that I could open the viewfinder.

So, how did the video camera mount work?

Unfortunately, I wasn’t able to find out.

I pulled out of the driveway and noticed in the first 100 feet that a slight mist was in the air. I went back into the house to check the radar and saw a tight band of reds and yellows just off the coast and moving slowly to the southwest, in my direction. 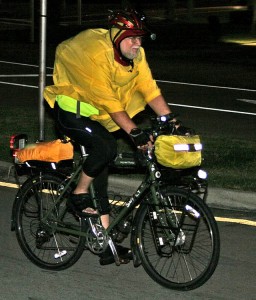 I stuck a few Ziploc bags in my jersey pocket, took off the video camera and headed out. About two blocks from the house, the mist turned into rain, and I ducked under a building overhang to rig for bad weather. That’s when the skies REALLY opened up and the wind started howling.

I put the cameras in the plastic bags and pulled the waterproof covers over my Arkel small bar bag and Tail Rider trunk bag, dug out my Campmor rain cape and pulled on leg warmers because the winds were chilly. After about 20 minutes, the heavy rain and winds dropped off to a steady rain and I took off to the assembly point.

Stan of Wheels of Wellington shot this picture of me after the rain had slacked off and I had dropped the finger loops on the rain cape to be less like a sail. I resemble a big orange pumpkin going down the road, because I put the cape over the CamelBak M.U.L.E. I was wearing. What his photo doesn’t show is how the FlaskBak I was trying out caused the whole back of the cape to light up.

I’m one of those folks who actually likes riding in the rain. The brim of the rain cape extends out far enough that my glasses stay relatively dry and the fenders kept my legs dry except for a couple of flooded areas where I got a little water on my feet. THAT didn’t matter because I was wearing Shimano sandals. 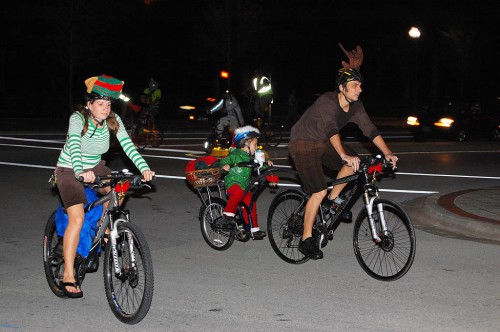 I’ve been holding off on writing this because I wasn’t sure what to say. I’ve really enjoyed the other Freakbike Militia events I’ve participated in. I went so far as saying the Summer of Love ride was the most fun group ride I’d ever been on. I said that even the motorists who were briefly inconvenienced seemed to pick up the good vibes of the ride.

I didn’t get that same good feeling on this one.

Things that made me uncomfortable

Will I do another Freakbike Militia ride?

Yeah, probably. (If they’ll have me back after reading this review.)

I like the folks and this was the first bad experience I’ve had. Maybe I was just cranky because I was still half-sick; maybe the rain delay caused things to be even more disorganized than the usual a non-organized ride; maybe the motorists were in a rush to do Christmas shopping, who knows?

If I feel like the next ride is unsafe or that it’s pissing off people more than it’s promoting cycling, then I’ll have to re-evaluate.